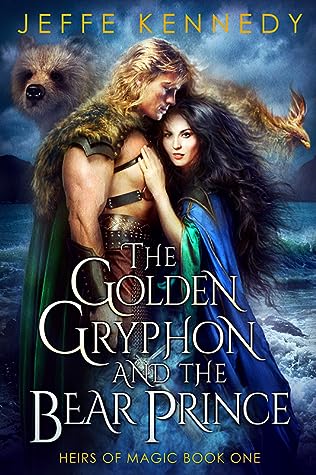 Synopsis: Follows The Long Night of the Crystalline Moon in the UNDER A WINTER SKY fantasy holiday anthology.

A Legacy of Honor

Crown Prince Astar has only ever wanted to do the right thing: be a credit to his late-father’s legacy, live up to his duties as heir to the High Throne of the Thirteen Kingdoms, and cleave to the principles of honor and integrity that give his life structure—and that contain the ferocious grizzly bear inside. Nowhere in those guiding principles is there room for the fierce-hearted, wildly free-spirited, and dizzyingly beautiful shapeshifter, Zephyr. Still, even though they’ve been friends most of their lives, Astar is able to keep Zephyr safely at arm’s length. He’s already received a list of potential princess brides who will make a suitable queen, and Zephyr is not on it.

Zeph has wanted the gorgeous, charming, and too-good-for-his-own-good Astar for as long as she can remember. Not that her longing for him—and his perfectly sculpted and muscular body—has stopped her from enjoying any number of lovers. Astar might be honorably (and foolishly) intent on remaining chaste until marriage, but Zeph is Tala and they have no such rules. Still, she loves Astar—as a friend—and she wants him to at least taste life before he chains himself to a wife he didn’t choose. There’s no harm in him having a bit of fun with her. But the man remains stubbornly elusive, staving off all of her advances with infuriatingly noble refusals.

A Quest to Save the World
But things change when a new terror threatens the Thirteen Kingdoms. Following prophecy, Astar and Zeph—along with a mismatched group of shapeshifter, warrior, and sorceress friends—go on a quest to stop a magic rift before it grows beyond anyone’s ability to stop. Thrust together with Zephyr, Astar finds himself increasingly unable to resist her seductive invitations. And, in the face of life and death battles with lethal monsters, he begins to lose sight of why having her, just once, is such a terrible idea.

Review: I’ve always had a good time with Jeffe Kennedy’s novels, even though it’s been a long time since I’ve read one. She’s back with a brand new series in the world of the Thirteen Kingdoms.

Zephyr has always loved Astar. But he’s heir to the throne and he’s determined to do the right thing. That means staying a virgin until marriage, marrying the suitable woman his mother will choose for him and above all, behaving perfectly. It is not easy to follow this line when Zephyr is trying to seduce him and has secretly loved him since childhood.

Also when they learn that they have to go on a mission with some of their friends, she finally sees an opportunity with Astar or to abandon her hunt for good.

I had a hard time getting into the story, but little by little I started to get a little more interested in the characters and what they would become. Zephyr is a dynamic and fresh character and it was nice to see someone who didn’t care about the rules for once. Besides, she’s going to introduce Astar to a whole new world.

Yes, it turned out to be a very nice novel and I was thrilled to find the author’s pen again.