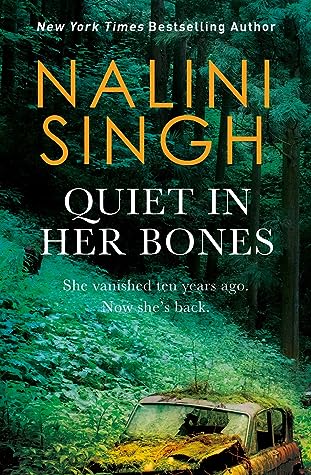 Synopsis: My mother vanished ten years ago.
So did a quarter of a million dollars in cash.
Thief. Bitch. Criminal.
Now, she’s back.
Her bones clothed in scarlet silk.

When socialite Nina Rai disappeared without a trace, everyone wrote it off as another trophy wife tired of her wealthy husband.

But now her bones have turned up in the shadowed green of the forest that surrounds her elite neighborhood, a haven of privilege and secrets that’s housed the same influential families for decades.

The rich live here, along with those whose job it is to make their lives easier. And somebody knows what happened to Nina one rainy night ten years ago.

Her son Aarav heard a chilling scream that night, and he’s determined to uncover the ugly truth that lives beneath the moneyed elegance…but no one is ready for the murderous secrets about to crawl out of the dark.

Even the dead aren’t allowed to break the rules in this cul-de-sac.

Review: I really liked what I’ve read from the author so far and I was curious to discover her in a genre I didn’t know for her: the thriller genre!

Aarav’s mother disappeared ten years ago now. He doesn’t remember much about that night, but he remembers her scream. A scream that froze him to the bone. The problem is also that since his recent accident, he had some memory loss. Everyone thought she had run away, money was gone and she often argued with her husband. However, her body was found in a car in the forest, a body that has been there for 10 years. If finding out what happened doesn’t interest many people, Aarav needs to know, he needs to know the truth! But his mind is playing tricks on him and finding out the truth will be far from easy!

I found that the novel was sometimes a bit long, but I was really curious to find out what happened. And I must admit that I didn’t expect such an ending and I was quite surprised by the revelations. It was a thriller a bit different from the others and I must say that I’ll be curious to read something else like this from this author!

9 thoughts on “Quiet in Her Bones by Nalini Singh”