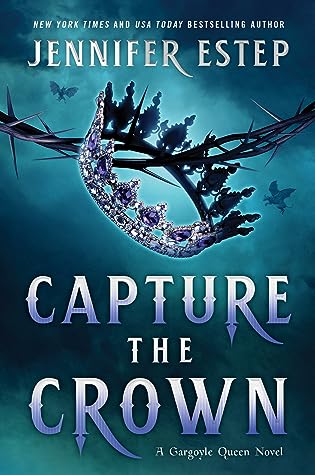 Synopsis: Gemma Ripley has a reputation for being a pampered princess who is more interested in pretty gowns, sparkling jewelry, and other frivolous things than learning how to rule the kingdom of Andvari. But her carefully crafted persona is just an act to hide the fact that Gemma is a powerful mind magier—and a spy.

Gemma is undercover, trying to figure out who is stealing large amounts of tearstone from one of the Ripley royal mines when she encounters Prince Leonidas Morricone of Morta—her mortal enemy. Gemma tries to steer clear of the handsome prince, but when she finds herself behind enemy lines, she reluctantly joins forces with Leo. Also coming to Gemma’s aid is Grimley, her beloved gargoyle.

Despite the fact that Andvari and Morta are old, bitter enemies, a dangerous attraction sparks between Gemma and Leo. Further complicating matters is Leo’s murderous family, especially Queen Maeven Morricone, the mastermind behind the infamous Seven Spire massacre.

The closer Gemma gets to the stolen tearstone, the more deadly plots she uncovers. Everyone is trying to capture the crown, but only one queen can sit on the throne…

Review: I loved the first trilogy and I couldn’t wait to discover this series that takes place in the same world, but follows secondary characters. To tell you the truth, I was thrilled to discover the story of Gemma and Leonidas.

Everybody thinks Gemma is a spoiled princess who is only interested in the mundane. But this is just a facade and our heroine hopes to be what Everleigh is to her people. It is not simple and in secret, she plays spy. Her latest mission: to find out why the gems in her mines are disappearing without a trace. And this quest could be much more dangerous than expected! And what to do when Leonidas, the man who betrayed her when she was younger and who is her mortal enemy, takes her to his castle where anyone would kill her if they learned who she is? She has to keep her secret while trying to figure out where the gems are disappearing. Something unites Gemma and Leo, but will it be enough to forget that they are enemies? And more importantly, what will he say when he learns who she really is?

It was a great novel again, and I loved seeing the evolution of our heroine. She does everything in her power to help her kingdom, even if her life is in danger. She’s going to have to make choices, face her feelings and most importantly survive! I can’t wait to see what happens next!

8 thoughts on “Capture the Crown by Jennifer Estep”