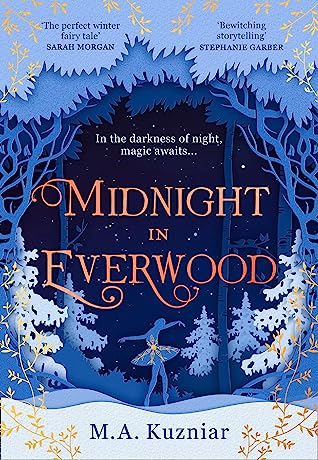 Synopsis: There’s nothing Marietta Stelle loves more than ballet, but after Christmas, her dreams will be over as she is obligated to take her place in Edwardian society. While she is chafing against such suffocating traditions, a mysterious man purchases the neighbouring townhouse. Dr Drosselmeier is a charming but calculating figure who wins over the rest of the Stelle family with his enchanting toys and wondrous mechanisms.

When Drosselmeier constructs an elaborate set for Marietta’s final ballet performance, she discovers it carries a magic all of its own. On the stroke of midnight on Christmas Eve, she is transported to a snowy forest, where she encounters danger at every turn: ice giants, shadow goblins and the shrieking mist all lurk amidst the firs and frozen waterfalls and ice cliffs. After being rescued by the butterscotch-eyed captain of the king’s guard, she is escorted to the frozen sugar palace. At once, Marietta is enchanted by this glittering world of glamorous gowns, gingerbread houses, miniature reindeer and the most delicious confectionary.

But all is not as it seems and Marietta is soon trapped in the sumptuous palace by the sadistic King Gelum, who claims her as his own. She is confined to a gilded prison with his other pets; Dellara, whose words are as sharp as her teeth, and Pirlipata, a princess from another land. Marietta must forge an alliance with the two women to carve a way free from this sugar-coated but treacherous world and back home to follow her dreams. Yet in a hedonistic world brimming with rebellion and a forbidden romance that risks everything, such a path will never be easy.

Review: I was very intrigued by this novel when I saw it. I have to say that the story sounds original, the time period and the comparison to Caraval in the tagline made me very curious.

Marietta loves ballet, but her family doesn’t support her. They expect her to take her rightful place at the end of the year and enter high society. But our heroine doesn’t want that. So when they decide to marry her off, she does everything to thwart their plans. And then there’s their new neighbor… If he seems to have charmed her whole family, Marietta sees through him and knows he’s not a good person! And when he asks for her hand, she refuses. Far from accepting her choice, he is determined to change her mind and sends her to a world filled with magic and wonder, but also cruelty. Trapped by a tyrannical king, her dancing skills will be put to the test to find a way to escape and return home.

I had a good time with the story, although I didn’t get hooked as much as I thought I would. The story had lengths, but it was nice to have a somewhat original story. The world that Marietta fell into was very interesting and I enjoyed discovering this novel.

8 thoughts on “Midnight in Everwood by M.A. Kuzniar”