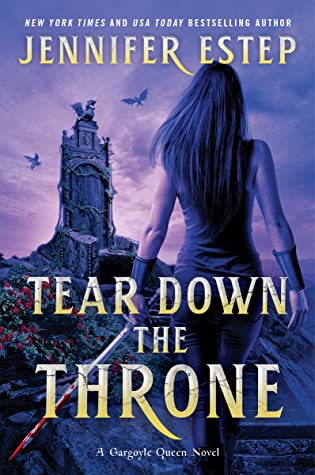 Synopsis: Crown princess. Clever spy. Powerful mind magier. Gemma Ripley of Andvari is all those things–and determined to stop an enemy from using magical tearstone weapons to conquer her kingdom.

Gemma’s quest for answers leads her to a trade Summit between the various kingdoms. Among the other royals in attendance is Queen Maeven Morricone of Morta and her son, Prince Leonidas–Gemma’s charming and dangerous nemesis.

Gemma knows that Maeven always has a long game in motion, and sure enough, the cunning queen invokes an arcane tradition that threatens the fragile truce between Andvari and the other kingdoms. Despite her best intentions, Gemma once again finds herself thrown together with Leo and battling her growing feelings for the enemy prince.

When a series of deadly attacks shatters the Summit’s peaceful negotiations, Gemma realizes that someone wants to tear the royals down from their thrones–and that this enemy just might succeed.

Review: This series by Jennifer Estep that takes place in the universe of the first one is awesome. I had a great time with the first book and was eager to find out what would happen to our two heroes: Gemma and Leonidas.

A summit is about to be organized and Gemma is still not close to stop the maneuvers of Milo, Leonidas’ brother. But she certainly didn’t expect that Maeven, her enemy, Queen Morta, would manage to manipulate her using an ancient tradition. If Leonidas manages to win three trials, Gemma will be forced to marry him.

Gemma will have to make crucial choices about what she wants, what she’s willing to do, because the future of the kingdom may well be in her hands. But her feelings will change everything.

I loved following our two heroes, watching them turn around and gradually tame each other. They are touching and at the same time, we understand that the situation is not simple.

I can’t wait to read the third volume now!

9 thoughts on “Tear Down the Throne by Jennifer Estep”