Synopsis: My name is Katniss Everdeen.
Why am I not dead?
I should be dead.

Katniss Everdeen, girl on fire, has survived, even though her home has been destroyed. Gale has escaped. Katniss’s family is safe. Peeta has been captured by the Capitol. District 13 really does exist. There are rebels. There are new leaders. A revolution is unfolding.

It is by design that Katniss was rescued from the arena in the cruel and haunting Quarter Quell, and it is by design that she has long been part of the revolution without knowing it. District 13 has come out of the shadows and is plotting to overthrow the Capitol. Everyone, it seems, has had a hand in the carefully laid plans–except Katniss.

The success of the rebellion hinges on Katniss’s willingness to be a pawn, to accept responsibility for countless lives, and to change the course of the future of Panem. To do this, she must put aside her feelings of anger and distrust. She must become the rebels’ Mockingjay–no matter what the personal cost.

Review: And here is the final book in the series. I was curious to see how the adventures of our beloved Katniss were going to finish and especially how the rebellion would unfold.

Our heroine is recovering from her return to District 13 after her rescue. Gale and her family are there for her to try to get her back on feet. But Katniss must make a decision quickly and choose whether to be a symbol of the uprising or not. I must say that I was quite surprised to see her hesitation and her complaints, she was so determined and decided on her choices. We often want to shake her so she can become aware that she is not alone and that many people rely on her. But on front of the wall, she realizes she has no choice, especially when all districts expect a single word of her to act. Of course, we can also have some news about Peeta. I was curious to see what had happened to him and I must say that I was not really expecting that. It really hurt my heart to see the person he had become. But between Peeta and Gale, who to choose? This question remains throughout the book though we all know that she will choose in the end. It’s sad to see how she always plays with the feelings of two young men without any problems. She becomes nasty and does not necessarily realize it. Yet the consequences are still there.

I loved the way the story was headed, war, plots, everything was very interesting. I was also glad to finally discover the District 13 after having heard so much about it in the second volume. And I must say that this place was as I had imagined it, even if a little stricter. We had not had much the opportunity to explore Gale and it was really interesting to do it here. He is a dedicated person to his cause and tries his best to help Katniss although sometimes she does not accept his decisions. Indeed, it’s hard for her to get ahead in this world where she is now an emblem. She can not make decisions, doesn’t know what she wants, but prefers to hide, to complain about her condition and to use those close to her. I did not expect to find this aspect of her personality. She realizes it sometimes but forgets quite soon about all this.

I was quite surprised at the end, I did not expect it to end it like that. It is quite sad and at the same time the story ends quite well. It is always difficult to finish a story such as this one, but I found that the ideas were good enough. It was certainly a good trilogy and I was glad I could learn the last words of the story. 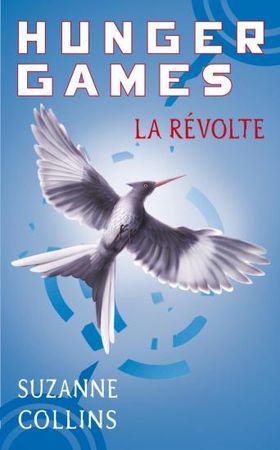 The Reluctant Reaper (The Reluctant Reaper, 1) – Gina X. Grant
Life for Kirsty d’Arc might not be perfect, but it’s far from hellish. She likes her job, has a great BFF and truly admires Conrad, her boss. But when she dives in front of a lunatic’s blade to save him from certain death, she finds out Conrad isn’t so admirable after all. In fact, he’s traded her soul to the Devil!

While her body lies comatose on the Mortal Coil, Kirsty’s spirit is dragged straight to Hell…which is not quite the fire-and-brimstone abyss she’d expected. In fact, the place is quirky, wacky, and not without charm. Desperate to reunite body and soul before her time runs out, she seeks out allies, earning the friendship of a powerful drag demon, a psychic server and most importantly, Hell’s civil servant. But what of her growing attraction to Dante, the sexy Reaper with a flair for romantic language—can she forgive him for scything her soul?

Stuck in the netherworld, Kirsty vows she’ll do everything on her postmortem bucket-list, starting with getting her life back and ensuring that Conrad has Hell to pay!

Thank you so much Aurian!!
Sacrifice (Mortal Path, 2) – Dakota Banks
A demon’s enslaved executioner–a ravager of lives and souls–Maliha Crayne has been reborn, willing to sacrifice her immortality for a chance at freedom . . . and salvation. Now she has an opportunity to prevent the death of thousands–perhaps tens of thousands–to make up for the countless lives she has obliterated over the centuries. To do so, she must locate and destroy an evil cabal of madmen in possession of a weapon of unspeakable power–and survive the immortal assassins who are now after her blood. But it means reverting to the old ways and surrendering once more to the darkness. And if Maliha dies before the mission is accomplished, the hell she once knew will seem like a picnic compared to the eternal torments awaiting her. A demon’s assassin for centuries, Maliha Crayne has gone rogue, determined to save a life for every one she’s destroyed in order to free herself from an eternity of enslavement, damnation, and excruciating torment. But as the powers that sustained her in the past fade, she is wary of trusting those closest to her–especially her lover, Jake. And her closest friends are beginning to disappear, one by one. Amid her anger, suspicion, and sorrow, her life is spiraling out of control.

Worse still, a beautiful Renaissance murderess is recruiting Maliha as her new assassin. Maliha is turning into a lethal puppet with an evil Immortal pulling the strings, forced to kill innocents or see her missing friends die horribly. Suddenly trapped in a moral no-man’s-land, Maliha is damned if she does and damned if she doesn’t . . . and time is rapidly running out.