Synopsis: Libby is an Enchantress—a witch gifted by the Goddess to conjure spells. When a magical presence is detected around a recent string of feline slayings, Libby takes the case to uncover the reasons behind the odd deaths. Much to her displeasure, the coven also sends a sexy warlock, Kale, to assist her.
While having the muscle around proves to be useful, fighting the attraction between them is worse than a hex, especially considering Kale is keeping secrets. But soon, Libby has bigger problems than the elusive warlock when her spells turn up clues that point to something far more sinister than slaughtered cats.

Now Libby has landed herself in the midst of an uprising. She trusts no one and isn’t safe—not from the warlocks stirring up trouble. Not from the worrisome rebellion she can’t escape. And certainly not from Kale, who is weaving a very dangerous spell over her heart.

Review: I knew Stacey Kennedy by her Frostbite series that I really appreciate. When this new novel came out I was very intrigued to find out how it was. In addition to that, I had the opportunity to read some very nice reviews, and I must say that I completely agree with them.
Libby is a young enchantress who is badly seen by her convent because of her attitude, but her gifts are still a rather important asset. But when she finds herself on an investigation to find out who is behind a series of cats murders, she is forced to team up with a newcomer, the wizard, Kale. But our young heroine does not trust wizards, especially since each of them hurts or disappoints her in one way or another. But Kale is different from all the men she has known and although she doesn’t trust him, an alchemy between them is growing, an alchemy which she is determined to resist. As she never had any partners, she has a lot of questions about that, and she tries to find out if he is there to watch her, or help her. One thing is certain, it seems like he’ll do anything to keep her alive and protect her. Their investigation takes them far beyond our two heroes would have thought, in the heart of a great rebellion, which could destroy them all. And oddly, all clues point to the former Libby’s boyfriend.
I enjoyed this novel, Kale is a man who has many facets, including many secrets. We’re intrigued when we discover him and we hope to learn more and understand what he is hiding. But it is much more difficult than expected, and especially strange when everyone tells Libby she should trust him. They all know who Kale is really, although he does not want her to know the truth. And I must say that it makes her crazy not to manage to determine what everyone knows. In addition to that, this man has some extraordinary talents which differentiate him from all other wizards she knows. As I said, it’s difficult for Libby to trust him, and she tries to make him pay for all the things he does. It was very funny to watch their exchanges, to see how our heroine would react. I could not wait to see what their relationship would evolve, and it is true that I was pretty surprised. There are big revelations at the end of the story and I was surprised to see how Stacey Kennedy came to lead us throughout the plot, surprising us repeatedly.
It was a very good volume and I am more than curious to have the chance to read more now! I will be watching closely the next novel. 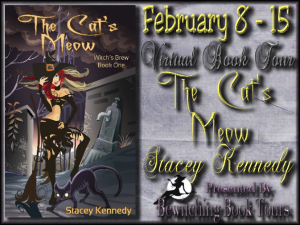 So? Intrigued? If you want to learn more about the book you can now win an ecopy of this first novel so don’t hesitate, it’s a really nice surprise.It’s international!