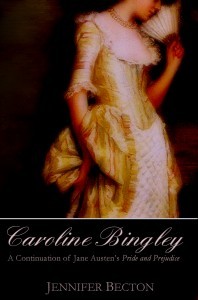 Synopsis: When Charles Bingley and Mr. Darcy made proposals of marriage to the Bennet sisters at the end of Jane Austen’s Pride and Prejudice, Caroline Bingley was both distressed by her brother’s choice of bride and humiliated by Mr. Darcy’s rejection of her.
And she made her objections known.

Now banished from her brother’s household, Caroline must return to her mother’s home in the north of England until she can make amends with both Bennet sisters. Desperate though Caroline may be to return to polite company, she absolutely refuses to apologize to Miss Elizabeth Bennet, and instead, she seeks an alternative route back into society in the form of Mr. William Charlton, heir to a barony.

Through her existing connections with Mr. Charlton’s sister Lavinia, Caroline begins to infiltrate the household in the hopes of securing the gentleman and his title for herself. However, she must also contend with her vexing emotions regarding Mr. Patrick Rushton, a once-wealthy landowner, and the meddlesome opinions of Mrs. Rosemary Pickersgill, the companion sent by her brother.

When all that Caroline has ever dreamed of attaining—an ancient family name, a title, and a home of her own—is finally within her reach, will she grasp for it even if it means disregarding the workings of her own heart? Or will she cast off the trappings of society and give herself to true love?

Review: We surf a lot at the moment on the Pride and Prejudice wave. Indeed, there are many books narrating a particular character, allowing us to learn more about this legendary novel, or at least to know more about everything. I confess with shame that no … I have not read Pride and Prejudice! But I hope to have the opportunity to do it one day, especially as I have it in my TBR pile (even in English and the cover is really pretty). But! Yes, because I’m not totally ignorant, I have seen many movies about this volume. So when I saw this book about Caroline Bingley, I thought it was a good opportunity to finally try the story and learn more.

This young Caroline was exiled by his brother, Charles, after his wedding with Jane. She does not understand why he wants her away when she was only trying to protect him. But making a scene with Charles, Jane, Darcy and Elizabeth did not help things. His brother wants her to apologize to everyone and make amends, but it is not at all to her liking, especially since she does not see the problem. So completely furious, she is forced to return home in the countryside with a chaperone, to reflect on her misdeeds. But this change of environment will not change her plans and she will do everything to rise in society, to prove to everyone that she is better than they think.

Caroline is a very complex character. When we discover her, we can not help but dislike her. It’s all we hope to never become. She despises people who come from a lower class and does not hesitate to spend her lack of moods on her companion. She dreams of only one thing: to marry a person with a title to rise even higher in Society. And especially when it comes to hide her money, that is to say, coming from a family of merchants. So when she goes home and she realizes that Patrick Rushton, a man whose family had lost everything all those years ago, is now associated with his father, she can only condemn this choice. And she won’t miss any opportunities to be rude to make him understand that. I really do not know how this man so charming managed to keep his cool and support each of her attacks. I was impressed by his control, and yet he did not hesitate to say what he thinks of her. I liked him a lot as well as their dialogues! This is a character who doesn’t play any games but he is not the only one and I was also very impressed by the kindness of Rosemary Pickersgill, her companion, who is really badly treated by Caroline.

But Caroline will really evolve in this story, allowing us to understand the vulnerable and frightened woman she is. She is much more than what we thought at first and I was quite surprised at the end of the novel to see her choices. Of course she does not change that much and stays the same person but she understands some very important points. It was pretty funny to see her realize all these changes, to become a person she does not know. We do not see much Charles and the other characters, but they are present in her mind throughout the story, or by letters that his brother sends her. It was really interesting to see this part of the history and be able to know Caroline and her family. So it was a pleasant surprise for me and I admit I am curious about the other books to see the different ideas that our authors were able to concoct.