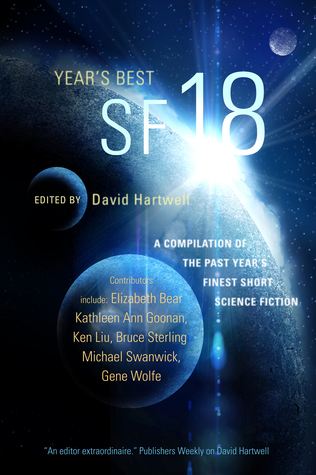 Synopsis: Once again, the finest short-form SF offerings of the year have been collected in a single volume.

With Year’s Best SF 18, acclaimed, award-winning editor and anthologist David G. Hartwell demonstrates the amazing depth and power of contemporary speculative fiction, showcasing astonishing short stories from some of science fiction’s most respected names as well as exciting new writers to watch. In this anthology, prepare to travel light years from the ordinary into a tomorrow at once breathtaking, frightening, and possible with some of the greatest tales of wonder published in 2012.

Review: Every year, David Hartwell collects the best science fictions stories from the previous year. This volume presents twenty-eight stories published during 2012. I think that it features a great mix of authors, some of them apparently quite new in the field. I was glad to see that about half of the texts were written by women and that we had a few non anglo-saxon names in the bunch.

Most of the stories are around 20 pages long, but a few very short stands out. For each of them there is a small introduction presenting the author and the text. And this time the synopses were not too revealing, not like in Hartwell’s Twenty-first Century Science Fiction.

As in most anthologies, you get a great variety of plots and stories, which is something I liked a lot. A.I., time travel, ecocatastrophe, sentient cars, virtual reality … are some of the ingredients you can find here, along with more unexpected ones like Aliens fangirling over Sherlock Holmes or Napoleonic code breaking.

In this regard, it was quite balanced. But I stay under the impression that there was too much “soft” science-fiction. A lot of the stories focused more on feelings and social interactions than on events. Some of them were even kind of weird. In general I have nothing against nuance and introspection, but I would have liked more action. Just a drop of space opera to please my space battle fan side. ^^ Here, I must admit that there are some stories I didn’t get into and some I didn’t even understand.

Nevertheless, I really liked more than half of them. The rest, well, not so much. But that is the good thing with anthologies: when you don’t like a text, you can jump to the next one. Besides, it is pretty subjective – I am pretty sure that there are stories I was not interested in, that you would like.

Those are my favorites:

Old Paint, by Megan Lindholm: I am a big fan of everything Megan Lindholm wrote as Robin Hood. I was therefore really eager to read this text and the author didn’t disappoint. Here she writes about a sentient and autonomous old family car and the effect it has on its owners. It is a touching story evoking family dynamics.

The Ghosts of Christmas, by Paul Cornell: An emotionally moving story with a strong streak of fatalism. It is about woman’s trips to an unchangeable future.

Liberty’s Daughter, by Naomi Kritzer: It is a detective story set in a richly developed alternative world. A smart young heroine, a missing person, an interesting geo-political situation, a lot of intriguing hints and an ending featuring a new mystery. I definitively need to read the other stories in the series.

Application, by Lewis Shiner: A really short and biting text about a personal computer own agenda. A bit disturbing, but extremely funny.

Waves, by Ken Liu: An interesting story about the price of immortality.