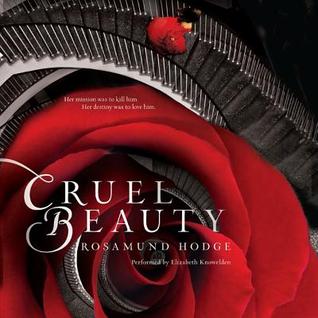 Synopsis: Since birth, Nyx has been betrothed to the evil ruler of her kingdom—all because of a reckless bargain her father struck. And since birth, she has been training to kill him.

Betrayed by her family yet bound to obey, Nyx rails against her fate. Still, on her seventeenth birthday, she abandons everything she’s ever known to marry the all-powerful, immortal Ignifex. Her plan? Seduce him, disarm him, and break the nine-hundred-year-old curse he put on her people.

But Ignifex is not what Nyx expected. The strangely charming lord beguiles her, and his castle—a shifting maze of magical rooms—enthralls her. As Nyx searches for a way to free her homeland by uncovering Ignifex’s secrets, she finds herself unwillingly drawn to him. But even if she can bring herself to love her sworn enemy, how can she refuse her duty to kill him?

Review: This is my first audiobook and after seeing so many people writing reviews about them everywhere, I was very curious to try that. I was a little afraid of not understanding English speaking, writing is easier for me, but I was surprised by the fact that everything went without any problems. Inattention was another point which made me a little anxious, but again, I had no problems. This is another thing that disturbed me and it’s maybe why I won’t try other audiobooks and it’s the time I took to listen everything. Yes because I did not expect that a book would take more than 10 hours and it was very difficult to find the time to get seriously in it and finish it. So of course it took more than two months to finally reach the end of the novel and yet the story was very nice to discover. For those who do not know about it, here we have a retelling of the Beauty and the Beast story and you know that I love stories like that so I was curious to discover a new one such as this one.

Nyx is a girl whose destiny is not very glorious. Her father made ​​a pact before her birth with a demon so she becomes engaged to him when she reaches the age required. But this demon rules the kingdom with an iron fist, establishing contracts with anyone asking for them, some markets that always return one way or another against the applicant. Also, Nyx was formed from birth to approach this demon and kill him to free the world. Oh yes our heroine is determined in her mission and that is certainly what she thinks, until she actually meets Ignifex and she realizes that something links them. Separated from her family, she will discover the castle in which she is trapped and will fall under the spell of Ignifex, as well as a shadow held prisoner here. But while her enthusiasm for her mission is leaving gradually Nyx might discover that the truth is far more complicated than anything she has learned so far. Nothing is all white or all black and Nyx will soon have to make a choice about what she wants for her future.

I liked to discover Nyx throughout the novel. This is not a heroine that we usually see, she is not necessarily very nice, she is even selfish but we can understand it by her education. She knows exactly how she behaves, trying to change, feeling guilty, but this is very difficult. She will meet her soulmate in Ignifex or even in his shadow Shade, yet both are very different from one another. So when Ignifex is hard, intractable but full of flaws, Shade is soft, but very manipulative. It is very difficult to decide about them and to understand exactly what they want and what they are. I was very curious to see how the story would evolve, whether Nyx would achieve her mission or not and to see how the relationship between the young woman and Ignifex would evolve.

We have many things here and it is true that the reader is kept in suspense throughout the story. I was quite surprised by some turnarounds and even if Nyx is easily manipulated by guilt, it was very interesting to see what she would become over the chapters. I also enjoyed getting to know the world of the author with so many little details, the demons, the Kindly ones, or castle so different than the others. Oh yes I took great pleasure in discovering this castle that reminds me a bit of the Harry Potter books with parts always changing, secrets buried everywhere, closed rooms by key and many other things. A pretty Beauty and the Beast tale.