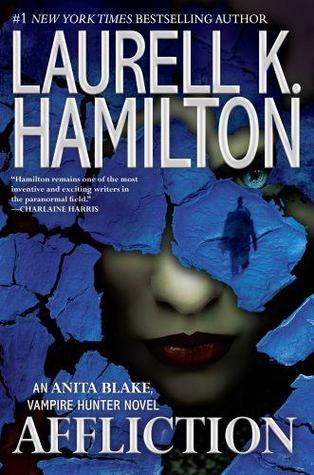 Synopsis: Some zombies are raised. Others must be put down. Just ask Anita Blake.

Before now, she would have considered them merely off-putting, never dangerous. Before now, she had never heard of any of them causing human beings to perish in agony. But that’s all changed.

Micah’s estranged father lies dying, rotting away inside from some strange ailment that has his doctors whispering about “zombie disease.”

Anita makes her living off of zombies—but these aren’t the kind she knows so well. These creatures hunt in daylight, and are as fast and strong as vampires. If they bite you, you become just like them.

Review by Cass: I just realized that I’m late because the French translation is already out.

This novel is somewhat reminiscent of the first books since it follows Anita working and that’s the part I enjoy the most.

The things that annoyed me a little:

– After 22 volumes, you know how her boyfriends look like, no need to redo descriptions each time and always the same ones (hair and muscles… it’s boring.)

– There is always a police officer who is a problem for Anita during an investigation, but this is frankly too much. I jumped paragraphs!

– Well, everybody is just talking about Anita’s sex life, this is the only topic of conversation (boring!)

– I have a problem with the size of Anita’s bra… I do not know exactly how big it is in France but EEE seems huge and she is obviously super thin. Yeah… my experience tells me that it’s not really possible!

This is what comes to my mind now. In fact, in summary, the fight game with zombies is cool, the sex scenes are not bad but the rest is not great.

Review by Melliane: I admit that it took me some time before starting this book. I don’t have any more the anticipation to throw myself on each release. Admittedly, Laurell K. Hamilton went sometimes part a bit too far in her ideas. Those who read the series know what I mean. But I was still curious to read the novel, especially after seeing a beautiful review written by Aurianx. Aurianx has a very good taste in books and I thought that if she had so enjoyed the novel so much, I shouldn’t be as pessimistic.

I admit that the idea of ​​the novel made me think of the one in “Jason”, as both started from the same base. Indeed, Anita is called by Micah’s mother, his father is dying in a hospital after being attacked by one of the strangest zombie. Indeed, he is rotting little by little from inside and nothing seems able to heal him. Finding Micah would be the last thing he could do. But our dear leopard does not know how his family will welcome him, especially after all the things he said to them or even by seeing him in couple now with Anita and Nathaniel. I admit that I was really curious to discover the whole family to this character so important to the story. But still nothing will happen as planned and our heroine will end up embedded in a story that completely exceeds her. She will have to track down a vampire who seems able to jump from one body to another regardless of the nature of the person. But besides that, he manages to create nasty zombies that no one else has seen yet. All this before everything is getting worse to the point that we wonder how Anita will be able to adjust.

I found that Laurell had managed to master this little story, trying to handle everything. Of course, what has been done can not be erased and as always everybody denigrates her about her sexual stories. But we get used to it in the end, is not it? I still found it lighter than usual. we have like three love scenes in the novel and that it was more than enough. I also enjoyed finding all the characters that we know and I did not really expect to see Jean-Claude so that was a nice surprise. But of course he will not be the only one there and we will also have the chance to see Edward! Yes, Yes! Edward! I was really happy to find him there as it’s a character that I particularly enjoy. The Apocalypse also allows Anita to understand some things about the men in her life. For the sad side, a “friend” of our executor will die and I confess that it was really difficult to see the consequences of that.

I must say that I enjoyed the story, even if the level is far from the first book for me but it’s a good read and I am curious to read more. Okay I admit that at the end, I wonder how the author will get to manage all the bad guys as they seem to come back at some time or another. Besides, I was a little disappointed by the end of the story. After all that the vampire had managed to do and all the evil he has committed, I found that the resolution of the case was concluded fast enough. Especially when Anita could have done it well before and so save many persons. So I was surprised to see such a purpose there and I expected a little more fighting spirit.

Finally you will understand that despite some details I enjoyed the story and as always I will read the rest of the series trying to see where this will lead us.