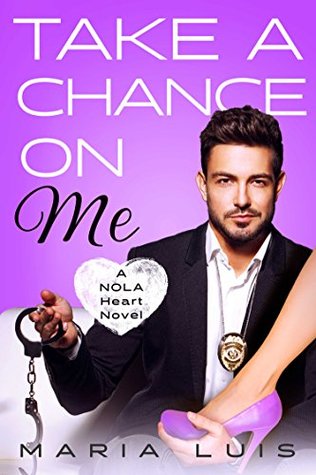 Synopsis: One dirty-talking detective and one feisty crime lab technician collide in the second installment to the sizzling NOLA Heart series! Mixing business with pleasure just got a little hotter down in the Big Easy …

Nathan Danvers has cultivated a certain, sexy reputation among the ladies in New Orleans. As a former marine and current detective for the New Orleans P.D., Nathan is just fine with being the guy women take home to bed, but not the guy they take home to meet the parents. It’s exactly what he wants–until he spots the black-haired beauty, Jade.

Jade Harper is over men. After four years too many with her ex, she’s ready for a fresh start. Goodbye Miami; hello New Orleans. Everything is perfect, including her new job with the NOPD–until she meets Nathan Danvers. Jade isn’t looking for Mr. Right–hell, she’s not even looking for Mr. Right Now–but this hot cop has a way of blurring the lines between lust and love. Will he tempt her to take a chance? Or will the shadows lingering in Nathan’s dark eyes prove that some closely guarded secrets are better left hidden?

Review: I had had a good time with the first volume and I was curious to discover this second one!

Jade finally had everything she ever wanted, she left Miami, the boyfriend she didn’t love, and all her life to start a new one. Thus, thanks to an old friend of her father’s, she found a job in New Orleans and became a technician for the police. And that’s also how she meets with Nathan Danvers. But here it is, if they are immediately attracted to each other, she has fired a cross on men and he only wants one-night stands. But it goes further, Nathan seems to be hiding secrets, something he keeps deep inside and doesn’t share with anyone.

If I had a little trouble getting into the story at first, I had a good time with the characters and the story. We get caught up in an investigation where Jade and Nathan will be more or less involved and they will try to find out who the culprit is and I admit that I didn’t expect such a turnaround in the end!

It was a pretty nice romance, with characters you can connect to quite easily. I’m curious to read the next one!

10 thoughts on “Take A Chance On Me by Maria Luis”