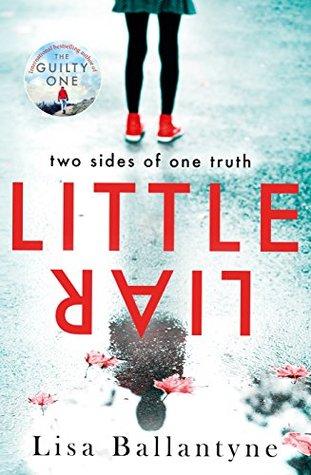 While Nick Dean is enjoying an evening at home with his family, he is blissfully unaware that one of his pupils has just placed an allegation of abuse against him – and that Nick’s imminent arrest will see the start of everything he knows and loves disintegrating around him.

Because, mud sticks, right? No matter if you’re innocent or guilty.

When Angela Furness decides that enough is enough – she hates her parents, hates her friends and, most of all, despises what has recently happened at school – she does the only thing she knows will get her attention: calls the police. But Angela is unaware that the shocking story she is about to tell will see her life begin to topple.

Because, once you’ve said what you’ve said, there’s no way back, right? No matter if you’re innocent or guilty.

In a gripping tale of two families torn apart by one catastrophic betrayal, Little Liar illustrates the fine line between guilt and innocence, and shows that everyone has their secrets, even those we ought to trust the most…

Review: I am always eager to discover new thrillers and I was curious to discover this new novel that I didn’t know.

This novel addresses strong and difficult themes such as pedophilia and rape. It is not simple, and it is a very dark and rather terrible story.

Angela is a 12-year-old girl who is out of control. She is violent, aggressive and very difficult to manage. But when she tells us, after a suicide attempt that she was raped by Nick, her drama teacher, their life will change.

We will alternate between the different characters in the story passing to Nick, Angela, her mother… Each protagonist will allow us to better understand what is really happening and what they think of the situation. We wonder what really happened, if Nick really did what he’s accused of, and if Angela’s lying or not. Yet all this mixes up and it’s complicated to discover the truth, until it comes out and then it’s the shock. Poor little Angela who doesn’t know how to express herself, but who at the same time becomes untenable.

It was a terrible novel, and yet it was also well done. I was really curious to find out what really happened and I must say that I didn’t expect such an end.