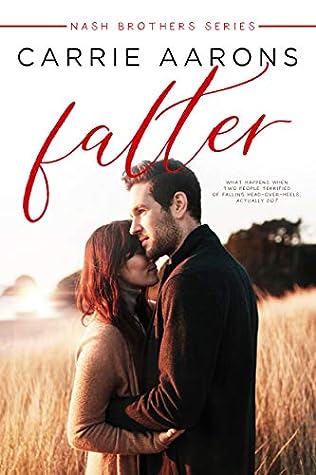 After her last relationship imploded in front of her eyes, she decides to take a break from swimming in the dating pool … possibly forever. The brilliant computer whiz loses her brain when it comes to love, and jumping feet first burns her every time.

Without a home, or much of a clue where life is headed, taking a trip back to the small town of Fawn Hill to stay with her best friend seems like the only option.

Except it puts Ryan directly in the path of the one man she can’t fall for. Fletcher Nash reminds her too much of the dark past she’s always run from; his demons are the things of her nightmares. And it’s no help that, when he looks at her, she feels as if Fletcher is the one person who truly understands.

Fletcher Nash vowed not to fall in lust.

Five years of sobriety, and he hasn’t broken the chastity promise yet. Not that it had to keep for this long … he’s well over the normal year addicts are told not to get involved.

But, aside from a busy schedule and trying to chase his dream of becoming a full-time artist, he has no intentions of committing to a woman until she is the one.

Why is it, then, that sassy, city girl Ryan Shea comes dangerously close to resembling the exact woman he could break that promise for? Like sand through his fingers, there is no way she’ll stay put … but his heart just won’t listen.

They pledged not to love anyone until it was the real thing.
So what happens when two people terrified of falling head-over-heels, actually do?

Review: Having just finished Forrest’s story, I could not wait to discover the story of his twin, Fletcher. Moreover, our hero is trying to overcome his years of addiction, something that is really not simple.

A few years have passed since the last volume and all the characters have evolved a little, especially Fletcher who does everything he can to get his life back on track. However, it is far from being simple and it is even worse when all his relatives are watching him, everything he is doing, not really trusting him. Five years have passed, and he has never wavered. But when Ryan comes back to town after a difficult breakup, he doesn’t know how to handle it. They’re both attracted to each other, but he swore he wouldn’t sleep with someone if it didn’t mean anything more and she doesn’t want to date anyone anymore. But when attraction strikes, they may not have a choice about their feelings.

I really had a good time again with this novel. Ryan and Fletcher are two broken characters and they will try to rebuild themselves together, even if it is far from simple. While I confess that I would have liked a little more information about Ryan and about her mother’s, I really enjoyed learning more about the last Nash brother. And then, how can we resist the pleasure of seeing all the other characters again? It was really nice too.

A very nice novel as I was saying.

10 thoughts on “Falter by Carrie Aarons”