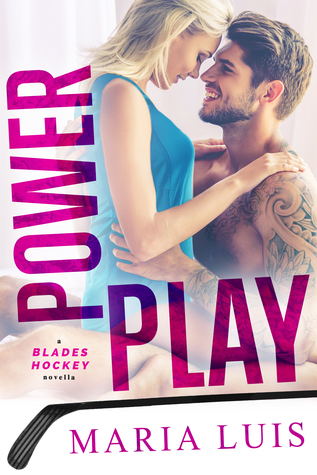 Synopsis: He (was) the hottest player on the ice.

She’s a (struggling) sports journalist looking for her big break.

Charlie Denton has been handed the most impossible assignment from her stick-in-the-mud boss: get an exclusive interview with the NHL’s golden boy, Duke Harrison.

The catch? She’s got eight days or she’ll be demoted. Fired. Kicked to the curb – No way is she letting her future rest on the broad shoulders of a goalie who is at least three seasons past his prime.

She has eight days to convince Duke that the loyal fans of The Cambridge Tribune (annual circulation: 1,000) are dying to know about his life, on and off the ice. Eight days to stand toe to toe with a man who is pure sex on a stick. Eight days to remember that every mind-blowing kiss is nothing but a power play.

What could go wrong?

Review: Here I am again with a new series by Maria Luis and I was looking forward to immersing myself in this first story!

Charlie needs an interview with the famous hockey player: Duke Harrison. So when she meets him and he refuses, she is very far from agreeing with him! Oh no, she won’t let him escape with that, and she’ll do anything to change his mind. Then follow many encounters, appointments where Duke can be as charming as he is unbearable. And then there’s Charlie. Ah Charlie! She’s so stubborn! She’s trying to do the best she can, but it’s not easy! Not at all! But between her and Duke? There are beautiful sparks!

It was a really nice novel and I had a good time with the characters. On top of that, the writing is fluid and I really liked the touches of humor throughout the story. We get attached easily to both characters and I’m curious to read more! The plot is not very original, but it doesn’t matter, because I really liked the idea. And hockey? So much fun!