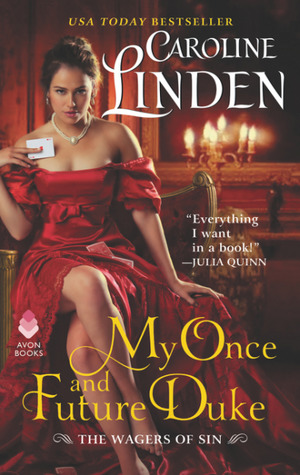 The Wagers of Sin, Book 1

Synopsis: What happens at the infamous Vega Club . . .

Sophie Campbell is determined to be mistress of her own fate. Surviving on her skill at cards, she never risks what she can’t afford to lose. Yet when the Duke of Ware proposes a scandalous wager that’s too extravagant to refuse, she can’t resist. If she wins, she’ll get five thousand pounds, enough to secure her independence forever.

Jack Lindeville, Duke of Ware, tells himself he’s at the Vega Club merely to save his reckless brother from losing everything, but he knows it’s a lie. He can’t keep his eyes off Sophie, and to get her he breaks his ironclad rule against gambling. If he wins, he wants her—for a week.

A week with Jack could ruin what’s left of Sophie’s reputation. It might even cost her her heart. But when it comes to love, all bets are off . . .

Review: It had been a while since I had read a historical romance, and since I had liked what I had already read by Caroline Linden, I was very curious to start a whole new series.

Sophie really didn’t have an easy life. When her parents died when she was 12 years old, her uncle did everything he could to get rid of her by sending her to boarding school before she turned 18 and ended up on the street. But our heroine is very good at cards and she is determined to earn enough to find a husband and finally start a family. Unfortunately, she makes a bet with the wrong person and ends up having to spend a week with Duke Ware, which could destroy her reputation as well as her heart. And while they hate each other, there is also an undeniable attraction between them.

I liked that novel very much. Sophie has her head on her shoulders and tries to get by as much as she can, even though it’s far from simple and Duke of Ware is an insurmountable obstacle. And what about this duke who is finally himself in the presence of the young woman? Yet they come from two very different backgrounds, but one cannot help but witness each of their exchanges. It was just as interesting to be in the world of gambling and betting, which I haven’t necessarily seen much of and which brings a touch of originality to the story.

As you can see, it was a very good start to the series and I’m really looking forward to Eliza and Georgianna story that we hear so much about, especially with this ending!

16 thoughts on “My Once and Future Duke by Caroline Linden”