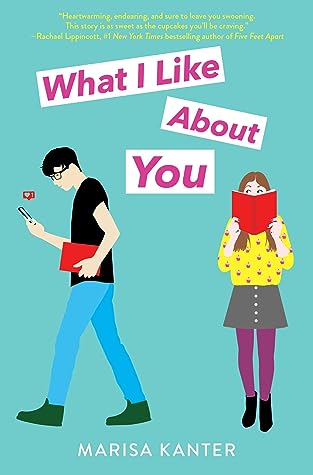 Synopsis: Can a love triangle have only two people in it? Online, it can… but in the real world, it’s more complicated. In this debut novel Marisa Kanter explores what happens when internet friends turn into IRL crushes.

There are a million things that Halle Levitt likes about her online best friend, Nash.

He’s an incredibly talented graphic novelist. He loves books almost as much as she does. And she never has to deal with the awkwardness of seeing him in real life. They can talk about anything…

Except who she really is.

Because online, Halle isn’t Halle—she’s Kels, the enigmatically cool creator of One True Pastry, a YA book blog that pairs epic custom cupcakes with covers and reviews. Kels has everything Halle doesn’t: friends, a growing platform, tons of confidence, and Nash.

That is, until Halle arrives to spend senior year in Gramps’s small town and finds herself face-to-face with real, human, not-behind-a-screen Nash. Nash, who is somehow everywhere she goes—in her classes, at the bakery, even at synagogue.

Nash who has no idea she’s actually Kels.

If Halle tells him who she is, it will ruin the non-awkward magic of their digital friendship. Not telling him though, means it can never be anything more. Because while she starts to fall for Nash as Halle…he’s in love with Kels.

Review: Reading the synopsis of the novel, I was immediately intrigued by this nice little YA romance. It made me think of Jenn Benett’s “Alex, maybe…” with whom I had had a great time.

So we find Halle, a very famous YA literary blogger on the web, whose alter-ego is Kels. Our heroine has a very rich life on the internet with friends who don’t know who she really is and especially Nash, her best friend of whom she knows everything while he only knows what she wants to share. When her parents leave to make a documentary, she and her brother find themselves living with their grandmother. But one thing is for sure, Halle never expected to meet Nash and try to be friends with him in real life. Problem is, she knows who he is, and he has no idea that she is Kels, his best friend. Trying to reject him at first, Halle will do everything to keep her secret, even if it means staying alone.

It was a very nice novel and I must say that I had a great time. I was a bit disturbed at the beginning by one or two translation mistakes in the French version that I very quickly forgot in order to immerse myself fully in the story and follow our characters with great pleasure ! I really liked Halle with her desire to share and her evolution within the blogosphere. Nash is very cute and sweet and we immediately want to be friends with him!

8 thoughts on “What I Like About You by Marisa Kanter”