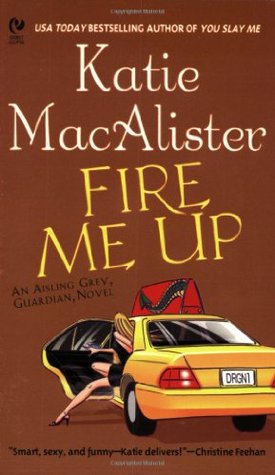 Review: I had a really good time with the first volume and having a little reading breakdown, I thought it was the right time to start the second volume, and it was perfect! I had a great time diving into the story to find all the characters again.

Aisling has to deliver an amulet to Hungary, but she took the opportunity to attend a large congress with many supernatural creatures. She hopes to be able to find a mentor to help her manage her Guardian gifts. But here it is, nothing is going as planned! Drake is here for a summit with the other dragons and he is determined to make her act like the mate she’s supposed to be! But that’s not all, because murders are committed and it seems that, as usual, everyone thinks she’s guilty! One more thing? Our heroine has become irresistible! She doesn’t know what’s going on, but all the men throw themselves at her feet and that… well, that’s a novelty!

I had a really good time with this story and I must admit that I didn’t expect such an end at all. A little point bothered me though and I must say that it was a little big to find Rene here, again even if it was a pleasure to see him again. Apart from that, I found the plot well conducted and I had no doubt about the identity of the culprit. As for Drake and Aisling’s relationship, it’s turbulent and I’m curious to read more!

8 thoughts on “Fire Me Up by Katie MacAlister”