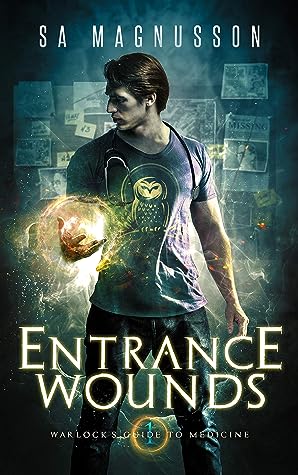 Synopsis: The first novel in a Warlock’s Guide to Medicine—introducing a new urban fantasy hero.

Leo Berlin never wanted to mess around with magic. He wanted to become a doctor. Help people. Save lives. But when his free-spirited sister Nora disappeared under suspicious and likely mystical circumstances, it threw a troll-sized wrench in Leo’s plans.

The idea was simple. Drop out of med school. Make a deal with a gorgeous Fairy Queen. Accept the intoxicatingly powerful magical abilities she could bestow upon him. Use them to find Nora—and to put an end to anyone who had hurt her or stolen her away.

The execution? A little sloppier. For a year now, Leo has been running a dubious magical medical practice while searching for clues as to Nora’s whereabouts—and only now has he stumbled on something promising. Word on the street is that a guild of wizards is meeting on the summer solstice, and Leo has caught wind that someone matching Nora’s description might be there.

Just when Leo thinks he might have finally made the break in Nora’s disappearance that he’s needed for so long, something else is dumped into his lap. Someone in the city’s clubs spiking drinks with dark magic. Worse, across the Twin Cities, even more young women are going missing—and if Leo doesn’t find them, he’s not sure anyone will.

Review: I had seen this book on Amazon and I took it out of curiosity to see how it would be like.

Leo’s life has changed dramatically since his sister disappeared. He doesn’t know what happened, but it’s been almost a year since he dropped out of school to find Nora. It’s been a bit of a whirlwind until a half-dead elf shows up on his doorstep, an elf who might just bring him a whole new lead.

Allying with people from his past to help him, Leo will embark on a whole new adventure that may finally bring him the answers he’s been waiting for and that may not necessarily be the ones he wants.

It was a pretty cool novel, although I have to say I didn’t get as hooked as I thought I would. I followed with curiosity the story of Leo which is just beginning. I’ll see how the sequel will be!