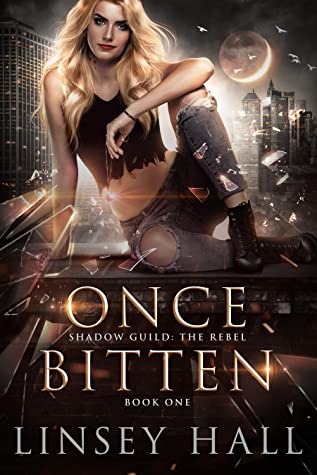 People say I’m a weirdo. Sure, my idea of a party is a mini box of wine and hanging out with a feral raccoon, but it works for me.

When I’m accused of murder, things get crazy. One, I learn that I have magic. Two, there’s a secret magical city hidden right in London itself. And three, my only hope is a vampire who’s sexy as sin and scary as the devil himself. He’s called the Devil of Darkvale, and he all but owns Guild City.

Some say I should just quit and turn myself in. Not a chance. I’m going to solve this murder myself, which means surviving in a new world of witch parties, magical guilds, and a vampire with a tortured past. The vampire and I are like colliding stars, and the heat is irresistible. I should avoid him, but if I want to save my own life, he’s my only hope.

Review: This is an author I really wanted to test after seeing her novels all over the internet. So I was delighted to get into this first volume.

Carrow has the incredible gift of being able to see someone’s future or past by touching an object or a person. It’s a power she doesn’t master, but it helps her sometimes. But when she finds herself in front of a dead man, killed the same way her best friend was, trouble begins. Hunted by the police, Carrow will do everything in her power to find the murderer and clear her name. Unfortunately, things will not go as planned when she discovers a world full of magic where a vampire as beautiful as he is enigmatic seems interested in her. Helped by her new friends, our heroine will have to understand what is going on with this vampire, but also do everything she can to find out the truth.

It was a very nice novel and I liked the mix of supernatural creatures. There were a lot of ideas and I must say I’m very curious to see what happens next, especially the relationship between Carrow and the Devil of Darkvale. Lots of things to look forward to!

10 thoughts on “Once Bitten by Linsey Hall”