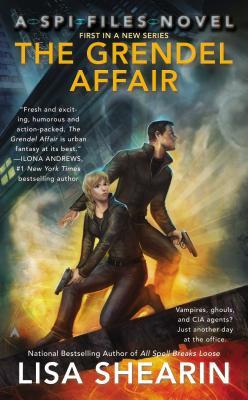 Synopsis: We’re Supernatural Protection & Investigations, known as SPI. Things that go bump in the night, the monsters you thought didn’t exist? We battle them and keep you safe. But some supernatural baddies are just too big to contain, even for us…

When I moved to New York to become a world famous journalist, I never imagined that snagging a job at a seedy tabloid would change my career path from trashy reporter to undercover agent. I’m Makenna Fraser, a Seer for SPI. I can see through any disguise, shield, or spell that a paranormal pest can come up with. I track down creatures and my partner, Ian Byrne, takes them out—usually saving my skin in the process.

Our cases are generally pretty routine, but a sickle-wielding serial killer has been prowling the city’s subway tunnels. And the murderer’s not human. The fiend in question, a descendant of Grendel—yes, that Grendel—shares his ancestor’s hatred of parties, revelry, and drunkards. And with New Year’s Eve in Times Square only two days away, we need to bag him quickly. Because if we don’t find him—and the organization behind him—by midnight, our secret’s out and everyone’s time is up.

Review: I had read some novels from another Lisa Shearin series and had a good time. So when I saw this series, I was curious. And then, all the reviews I had seen were very positive, so how could I resist ? I couldn’t wait to get into the story.

Makenna, a former newspaper girl, is now part of a secret organization that investigates monsters in the city. But when she finds herself at one of her informers’s house and that a creature appears, things change completely. A dead man is found with her photo in one of his pockets and people she doesn’t know seem to know her. What happens? Our heroine, who knows nothing about fighting, will do everything she can to find out the truth with her partner Ian.

It was a nice novel, but I didn’t get as hooked as I thought. Overall I had a good time with the story and was curious to find out the truth behind all the events. Makenna is facing a new world and it was very nice to be there. I’m curious to see how she will fare in the future.

10 thoughts on “The Grendel Affair by Lisa Shearin”