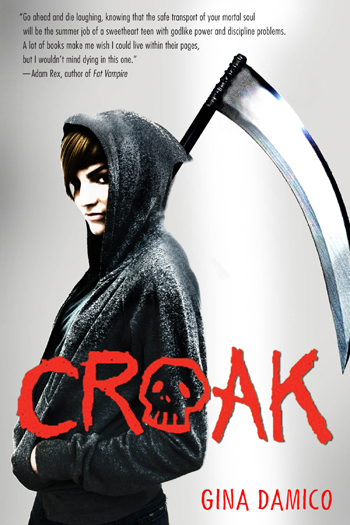 Synopsis: Fed up with her wild behavior, sixteen-year-old Lex’s parents ship her off to upstate New York to live with her Uncle Mort for the summer, hoping that a few months of dirty farm work will whip her back into shape.

But Uncle Mort’s true occupation is much dirtier than shoveling manure. He’s a Grim Reaper. And he’s going to teach Lex the family business.

She quickly assimilates into the peculiar world of Croak, a town populated by reapers who deliver souls from this life to the next. But Lex can’t stop her desire for justice — or is it vengeance? — whenever she encounters a murder victim, craving to stop the attackers before they can strike again.

Will she ditch Croak and go rogue with her reaper skills?

Review: I had this novel for a long time and I admit I have a soft spot for reaper and ghost stories so I was very curious about this novel.

Lex, who was a model little girl, has changed without anyone understanding why. She has become a difficult teenager who is always causing problems. Not knowing what to do, her parents decide to send her to spend the summer with her uncle Mort, whom she doesn’t know, to work on a farm. It’s worse than expected: no cell phone reception, no internet and no TV! Hell, basically! But her uncle is hiding more than one secret, as he is actually a reaper and trains teenagers in this “field” and is determined to teach his niece as well.

This was a fun novel, although I have to say I didn’t connect with the characters the way I wanted to. Lex is not easy and it’s true that I wasn’t really interesting on what would happen to her, at least that’s what I felt. But overall, it was an enjoyable novel to read even though I’m not sure I’ll read the sequel.

6 thoughts on “Croak by Gina Damico”