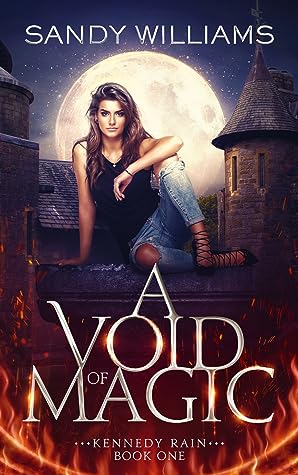 Synopsis: They trusted her to keep the peace between the paranorms. They made a mistake.

Kennedy escaped the family business when she turned eighteen. Now, an ill-timed vacation pulls her back to The Rain Hotel, the only known null zone on the planet. It’s a place where vampires can see the sun rise and werewolves can avoid the lure of the full moon. And it would be the perfect place for a paranormal wedding…if the bride wasn’t the local alpha’s daughter and the groom the scion of a vicious master vampire.

With a sexy werewolf determined to sabotage the wedding and dark forces threatening The Rain, Kennedy’s life is thrown out of balance when she’s forced to confront a past she swore to avoid. Ultimately she must choose: will she maintain the stability of the supernatural world…or will she destroy it.

Review: I loved the Sandy Williams faes series and was very curious to discover the first volume of this brand new series. I must say it was a very nice surprise!

Kennedy grew up in a very unusual hotel: when paranorms go inside, they become like humans. It’s a very popular hotel, as you can imagine! But after something happened when she was younger, Kennedy ran away from this life. But when her parents go on vacation, she finds herself in charge of the hotel once again, and it won’t be easy. Why? The employees seem to hate her, the debts seem to be piling up at the hotel and the girl she hated in high school, the daughter of the werewolf alpha, has decided to get married at the hotel to a member of her enemy clan: the right-hand man of the vampire leader. This is a very big problem for Kennedy who has no intention of accepting!

And then there’s Blake, the werewolves’ right-hand man, who is sexy as hell and determined to turn our little Kennedy on his head. I can’t wait to see what happens next!

There is a lot going on in this novel and I was curious to find out the whole story. I actually had a hard time letting go of it until the end. A lot of points were initiated in this first volume and I will be waiting with great anticipation for volume 2! Kennedy is a character I loved following and I’m sure she has many surprises in store for us. I would also like to learn more about Christian who is a very enigmatic character!

8 thoughts on “A Void of Magic by Sandy Williams”