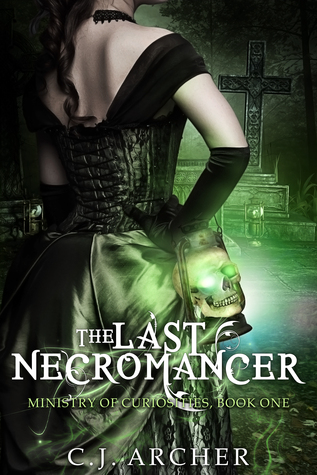 The Ministry of Curiosities, Book 1

Synopsis: Victorian London: For five years, Charlotte (Charlie) Holloway has lived as a boy in the slums. But when one theft too many gets her arrested, her only means of escape lies with a dead man. Charlie hasn’t raised a spirit since she first discovered she could do so five years ago. That time, her father banished her. This time, she brings even more trouble upon herself.

People are now hunting Charlie all over London, but only one man succeeds in capturing her.

Lincoln Fitzroy is the mysterious head of a secret organization on the trail of a madman who needs a necromancer to control his newly “made” creatures. There was only one known necromancer in the world – Charlotte – but now there appears to be two. Lincoln captures the willful Charlie in the hopes the boy will lead him to Charlotte. But what happens when he discovers the boy is in fact the young woman he’s been searching for all along? And will she agree to work for the man who held her against her will, and for an organization she doesn’t trust?

Because Lincoln and his ministry might be just as dangerous as the madman they’re hunting.

Review: I saw a review of this novel and while looking for it on amazon, I realized that I had had it for a long time, and I took it when it was free.

I have to say that I’m in a difficult reading phase and yet I threw myself into it and was completely carried away by the novel and the story. I read it in one go.

Charlotte has been living on the streets since her father kicked her out, and she dresses up as a boy to survive since. But she’s now 18, and when she gets arrested, she has no other way to escape than to use her necromancer powers. Alas, revealing her powers in broad daylight, she finds herself being chased by two men without knowing what they want. When Fitzroy finds her, she refuses to say who she is, refuses to reveal that she is actually a girl and refuses to talk to him. Yet she will have to choose to trust him, at least a minimum, to move forward and she will discover many things about her past in the process.

I had a really good time. I loved the use of mythical characters in this novel and I have to say that I was really swept away by the story and the investigation. It’s going to be very difficult for Charlotte to be confident and move forward but it could open up new possibilities for her.

I’m not a big fan of 18/30 years old romances, but it’s actually pretty well done and it’s a little less disturbing to me considering the period it’s set in. It’s only the beginning, but you can feel the tension between the characters and I’m curious to see what happens now.

6 thoughts on “The Last Necromancer by C.J. Archer”