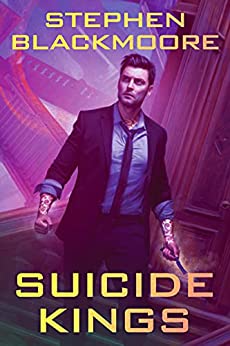 When Eric Carter helps a friend with a deadly ritual that could determine the fate of the most powerful mage family in Los Angeles he steps into the middle of centuries-long feuds with people who make the Borgias look like the Brady Bunch.

Eric’s just fine with the murder, soul eaters, and death magic. He’s just having trouble adjusting to being brought back from the grave.

If he’s not careful, somebody’s going to put him right back.

Review: It was a fun series and the mythology is always great to follow. So I went back to the adventures of Eric Carter with great pleasure.

Our hero has come back from the dead and it’s a situation he has a hard time dealing with. It is far from being simple, it must be said! So when Gabriela and her friend Amanda ask him for help to kill someone, Eric doesn’t mind, but he didn’t expect to find himself in the middle of family intrigues in a very powerful family.

Between murders and lies, Eric will have to choose the person he wants to be and that choice will determine his future.

This was a fun new volume that, while it doesn’t advance the plot much, propels us into a whole new story. Eric is still great and it’s a pleasure to have him back.