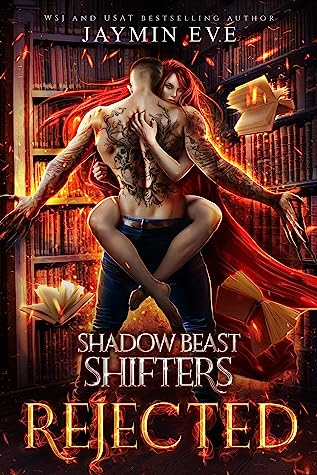 Synopsis: My father made a terrible mistake. One I’m left paying for.

As a wolf shifter growing up in a strong pack, I should be living my best life. But after my father tried to kill the alpha, I’m labeled an outcast, traitor, less than dirt.

When I can’t take pack life any longer, I run, but apparently they don’t like losing their punching bag. Torin, the alpha’s son, drags me back before my first shift… a shift that will reveal my true mate.

I never could have predicted who mine would be, but the moment my wolf looks upon him, I’m filled with hope for a brighter future.

After all, no one ever rejects their true mate, right?
Wrong. Very wrong.

When the wolves attack, my soul screams for vengeance, and somehow I touch the shadow world. Somehow I bring him to our lands.

The Shadow Beast. Our shifter god. The devil himself.

Turns out being rejected by my mate was only the beginning.

Review: I wasn’t familiar with this series, but I’m always on the hunt for new UF so I gladly jumped into this novel.

Mera’s life changed completely when her father attacked the alpha of the pack. Now an outcast, she finds herself constantly harassed and tortured. At the breaking point, she decides to run away… but nobody leaves the pack. However, our heroine is not like the others, she has unsuspected powers and even if she doesn’t know how to use them, she attracts the attention of the Shadow Beast who is determined to use her.

I was drawn into the story from the beginning. But I must admit that as soon as Mera goes into the world of the Shadow Beast, I found the pace slowed down and my interest waned a bit. That aside, I had a good time and I have to say I’m curious to see what happens next. A lot of leads were planted!

9 thoughts on “Rejected by Jaymin Eve”