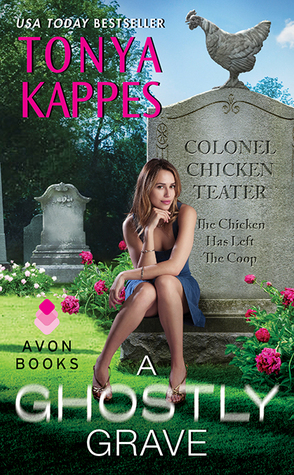 Synopsis: There’s a ghost on the loose—and a fox in the henhouse

Review: After a good time with the first book, I was curious to see what the author would introduce with her second volume. But I must say that once again we have a story full of humor, incredible characters and of course a new survey all accompanied by another ghost.

As I said, Emma finds herself haunted by a new ghost but unlike Ruthie, Chicken was buried 4 years ago. But thanks to her relations with the police, Jack exhumes the body to determine whether the man actually killed or not. While her boyfriend makes every effort to prevent her to investigate this new case, Emma remains determined to find the culprit. Who else but his wife could be the ideal culprit? Especially when we know that she was jealous of the award winning Chicken’s hen. Oh yes, and we can understand it because he literally idolized the animal and brought her to the forefront whatever happens. An unpleasant situation for his young wife I must say. I admit that I loved the conversations of the ghost about his favorite chicken! It’s pretty impressive to see what he was willing to do for her. You can imagine that it’s not common to see something like that! Besides, he had a Cadillac used only to transport his favorite animal. Yeah! Really!

It’s not all because Emma’s grandmother, this really wacky woman decides that it is time to concur as mayor of the city. We will also see the evolution of the relationship between Jack and the young woman, which is not so easy regarding the situations where we find Emma each time. I must say that to discover the culprit, the young woman does not hesitate to act, and even to completely change her appearance. Yep, we can see her blonde, seeing her attend a Miss contest and even singing! It makes you curious is not it? Especially when we know that she is far from that all. As for the murderer elsewhere, I quickly realized about his identity, perhaps because he stood out from the other characters but it’s true that I was curious to discover the reason behind this gesture.

In any case I had a great time with this new story and I’m curious to read more again for a new adventure for our funeral employee.

38 thoughts on “A Ghostly Grave by Tonya Kappes”