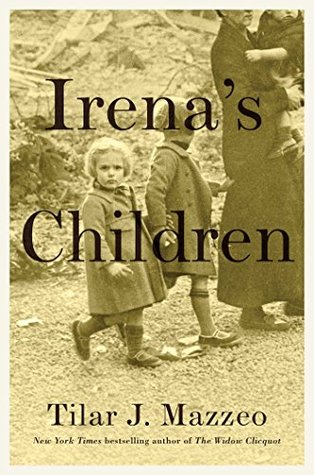 Synopsis: From the New York Times bestselling author of The Widow Clicquotcomes an extraordinary and gripping account of Irena Sendler—the “female Oskar Schindler”—who took staggering risks to save 2,500 children from death and deportation in Nazi-occupied Poland during World War II.

In 1942, one young social worker, Irena Sendler, was granted access to the Warsaw ghetto as a public health specialist. While there, she reached out to the trapped Jewish families, going from door to door and asking the parents to trust her with their young children. She started smuggling them out of the walled district, convincing her friends and neighbors to hide them. Driven to extreme measures and with the help of a network of local tradesmen, ghetto residents, and her star-crossed lover in the Jewish resistance, Irena ultimately smuggled thousands of children past the Nazis. She made dangerous trips through the city’s sewers, hid children in coffins, snuck them under overcoats at checkpoints, and slipped them through secret passages in abandoned buildings.

But Irena did something even more astonishing at immense personal risk: she kept secret lists buried in bottles under an old apple tree in a friend’s back garden. On them were the names and true identities of those Jewish children, recorded with the hope that their relatives could find them after the war. She could not have known that more than ninety percent of their families would perish.

In Irena’s Children, Tilar Mazzeo tells the incredible story of this courageous and brave woman who risked her life to save innocent children from the Holocaust—a truly heroic tale of survival, resilience, and redemption.

Review: This is a kind of novel that I like a lot. But it’s true that I have to admit that it’s been a long time since I tried such a story. Besides, I did not know Irena Sendler and I was very curious to discover her story.

I had a little trouble getting into the novel. I found the style was a little destabilizing at first. It is also necessary to get used to the fact that the story is written in the present while sweeping several years. But once it’s done, I did not have any worries and I was passionate about the life of this unusual young woman. Irena, how brave you were! I was impressed by all that you managed to do for these children, all those you managed to save, the stress you were under when the SS and the Gestapo were on your trail, or the very complicated relationship you had with Adam, the Jewish man you loved so much!

It was a very interesting novel and like many others it shows the horror of war. But above all, we get to know Irena, and all the people who helped her, who made that all her actions were successful, but we also discover all the dead, all the difficulty and the fear of being betrayed that she felt. It was a really interesting novel and I was really drawn to the story of this young woman.