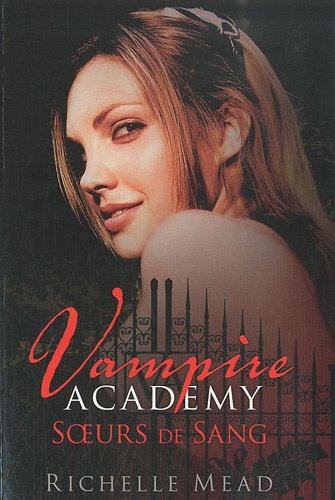 Synopsis : St. Vladimir’s Academy isn’t just any boarding school—it’s a hidden place where vampires are educated in the ways of magic and half-human teens train to protect them. Rose Hathaway is a Dhampir, a bodyguard for her best friend Lissa, a Moroi Vampire Princess. They’ve been on the run, but now they’re being dragged back to St. Vladimir’s—the very place where they’re most in danger. . . .

Rose and Lissa become enmeshed in forbidden romance, the Academy’s ruthless social scene, and unspeakable nighttime rituals. But they must be careful lest the Strigoi—the world’s fiercest and most dangerous vampires—make Lissa one of them forever.

Review : When I started this book, I was a little afraid to be desappointed. Endeed, I had heard so much stuff about this novel that I thought I would dislike the story. Yes, I know, I’m very pessimistic. But, finaly, I’m surprised, I really like this book from the start to the end. And I’m very grateful to Mutinelle who gave it to me.
I really like the writing style of Richelle Mead (with the Dark Swan serie or the Succubus Serie) and we find perfectly it here. So we can have a pleasant and a well rhythmic reading.
We immediately appreciate the strong and determined nature of Rose, who takes to her heart her guardian job. Her only goal is to protect Lissa, our Moroï Princess. This book starts by thier return to the Academy. In the beginning, we don’t know anything about their escape but we will learn gradually about it.

Lissa is a very interesting character too. I really like her powers and her weaknesses even if sometimes we would like she wakes up. She lives in a pink world and she doesn’t realize what she is doing. But, she will change step by step too, and I was finaly happy by her evolution.

For the third main character, Dimitri, I was very intriguing about him and I Hope to learn a little more in the next books. I would love to know how will evolve his relationship with rose and his guardian job.
The framework’s story was captivating and I was really curious about Anna and Vladimir. Everything isn’t revealed directly but all along the story, this allows to keep the reader in suspense. I didn’t expect this culprit, it was a real surprise. I hope to read the second novel soon !