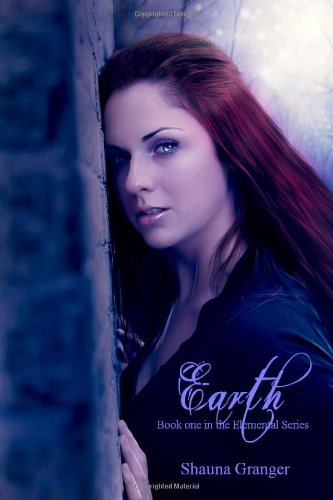 
Synopsis : Shayna and her two best friends have the abilities to manipulate and control the four elements, earth, air, water and fire. While learning to hone their growing powers, they discover a new and malicious presence in their sleepy beach town. Someone is performing blood magic and threatens to expose their small magical community. So far only small animals have been slaughtered, but then the nightmares start. Shayna suffers nightmares of being chased and sacrificed only to wake up bloodied and bruised. She thinks her magical blood is the ultimate target for the final blood rite. When an innocent girl, Tracy, is kidnapped Shayna knows it’s only a ploy to draw her out; she can’t let someone die because of her.

Melliane’s review : Earth is the first self-published Young-Adult novel from Shauna Granger. I would like to thank A Tale Of Many Reviews and the author for giving us the opportunity to read this book.
When I first read the synopsis, I was intrigued by the story. We discover three friends, Steven, Shayna and Jodi, kids like any other but with great skills: each possesses a great power, and practices magic in secret. We follow the story through Shayna’s eyes, a young girl very receptive to others. But it’s not always a good thing, her empathy gift confronts her to others problems.
In the beginning, Shayna has some terrific nightmares that she doesn’t know anything about and they seem so real. Each time, I tried to find the meaning behind the dream but in vain. And when a schoolmate appears in them, I became very suspicious. This young man, Jensen, seems determined to know her and be her friend. We wonder all along what he wants and why he is so obsessed with Shayna.
Fortunately, her two friends are always here for her, to help and even share their power with her.
We quickly suspect who the culprit is but the reason behind his actions was a surprise. I really like the author style; the story has a good rhythm and keeps the reader curious about the events. The end arrives rapidly but the book isn’t very long either. I would like to know what the second novel is going to be about, and I will read it with pleasure when it will be released.

Inessa’s review : First of all I would like to thank A Tale Of Many Reviews and the author, Shauna Granger for allowing us to discover this novel. Earth is the first self-published book of a series entitled “The Elemental series.”

Shayna and her two friends, Jodi and Steven are witches, more precisely elementals. This means they each have an affinity with one element: the earth for Shayna, air for Jodi and fire for Steven. Their affinity with one element does not preclude them also to manipulate and control the other three. So regularly, our three friends meet to practice their magic, out of sight. Everything seems to go well in the brave new world for them, but in reality this is not the case. Recently, Shayna has horrible nightmares, and ani mals are found dead, slaughtered. It seems that rituals of blood, using the darkest of magic, have taken place, threatening to bring to light their extraordinary abilities. Our three heroes will therefore make every effort to find those responsible and put an end to their actions.

I found this novel was enjoyable to read despite of the fact there are some overlong passages. I admit that initially I had some difficulties, but once past the first three chapters, I found the story became more and more interesting and finally I liked it. Indeed, the arrival of Jensen and his brother Ian in high school will somehow disrupt the daily lives of our trio.

The story is told from Shayna’s point of view. I liked this character. Her gift of empathy allows her to be attentive and closer to the others. It’s a girl with temper. She is self-confident, she takes the initiative. She is the leader of this little trio. Of course, she can rely on her two friends, who always follow her, no matter what. Besides, I was fascinated by how these three young people are connected to each other. They are so close that it’s almost disconcerting. And even if they sometimes bicker, they form a close-knit group, however, always ready to stand together and support each other when necessary. They form a great example of friendship.

Regarding the other characters, who marked me the most is undoubtedly Jensen. Shayna feels attracted to him but at the same time, she is cautious and very suspicious towards him. Like the heroine, we ask ourselves lots of questions about him: Who is he? What does he want? And above all, how is he involved in this case? What does he hide?

Most of these questions are answered, gradually in the story but there are still some things that remain unanswered. In addition, I would like to learn more about the origins of the powers of Shayna, Jodi and Steven, because in fact we don’t know much. How did they inherit their magic talent? What about their parents? etc. So many ques tions… Perhaps the next book will provide us the answers. I will read it with pleasure!