We’re so glad today to have Amanda Stevens on the blog. Her series: Graveyard Queen is just awesome, if you haven’t tried it yet, you really need to! And if you’re interested, here are my reviews about the first, second and third book.

The Withering World of Amelia Gray 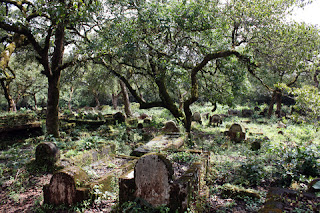 When I was little, cemetery exploration was a favorite pastime.  My house was situated between two graveyards and I spent many a Sunday afternoon wandering through the maze of headstones and statuary.  One of the cemeteries was abandoned and I wasn’t allowed to visit there alone.  Naturally, it became a favorite escape.  Nestled in a deep forest and shrouded by shade, the forgotten graveyard was a place of enchantment, a mysterious necropolis of sunken graves, crumbling headstones and fallen angels. The burials were old—pre-Civil war—and the symbols carved into the headstones intrigued me.  I could daydream there for hours.
There’s a term for graveyard fascination—taphophilia.  From the Greek words taphos, meaning tomb and philia, meaning love or obsession.  A love of tombstones and cemeteries.
When I decided to write a paranormal series, I knew I wanted the protagonist to have an unusual skill or occupation.  So I did an Internet search for strange jobs and up popped cemetery restorer—the perfect vocation for a character that would share my passion for graveyards.  She would be Southern (also like me) and a loner because her ability to see ghosts had isolated her from human companionship.  Her first name would be Amelia because it’s Southern and old-fashioned, and her surname would be Gray to symbolize the twilight world of ghosts. 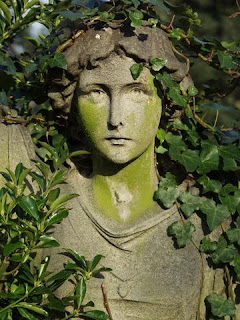 Amelia became so real to me that I knew I had to create a worthy love interest, someone dark and mysterious and charismatic to lure her from the safety of her graveyard kingdom and tempt her into breaking one of her father’s cardinal rules: never associate with those who are haunted.
Papa’s rules are broken in The Restorer; the past is revealed in The Kingdom; and the future is foreshadowed in The Prophet.  Set against the withering backdrop of abandoned and forgotten cemeteries, The Graveyard Queen series offers peeks into the lush dreamscape of restless souls, deranged killers and doomed lovers.
I’ve just been given the go-ahead for three more books in the series and I would like to invite you along on Amelia’s journey as her graveyard kingdom becomes ever darker and more mysterious.
…………..
Website:
http://www.amandastevens.com/
Blog:
http://www.amandastevens.com/blog/
Book Trailer:
http://www.youtube.com/watch?v=qaapLGC9zlQ
Facebook:
https://www.facebook.com/amandastevensbooks
Twitter:
https://twitter.com/AmandaStevensTX