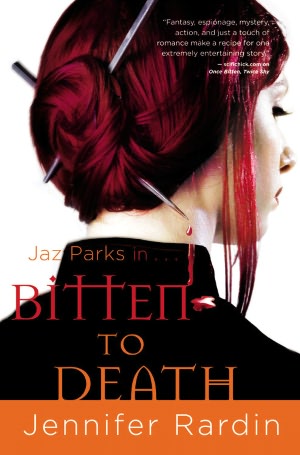 Synopsis: Jaz Parks here. My latest mission has taken me to the ancient Greek city of Patras; but instead of soaking up its splendor, I’m here to infiltrate a Vampere Trust. Only two vamps have ever escaped the tightly bound communities and lived to tell the tale: Edward “The Raptor” Samos, the most reviled criminal mastermind in recent memory, and Vayl, the CIA’s number one assassin who also happens to be my boss.

The Raptor is trying to take over Vayl’s former Trust. Unfortunately the Trust’s new leader has her own plans.

This job is going to be the death of me.

Review:  When I think it’s been a while since I read a Jaz Parks novel… I confess I really wanted to read this one in French as I had the others in this language. But I think I finally waited too long and I therefore forgot a lot of things about the story. I don’t think it was a good idea at the end to do that; I should have taken them in English. But it’s true I ask myself the same question now that I finished this fourth volume, indeed I don’t think I can now wait so long.
We meet in this novel all our protagonists despite Cole isn’t really present. But it’s not a problem; indeed, we already have a lot to manage with David, Vayl and Jaz. Well, I have to say they’re very talented to attract troubles. From the start, we wished about a relationship between our two heroes and it’s always difficult to really understand what they want. But this volume allows us to clarify some points. It’s a real pleasure to learn more about the Vayl’s past, this so mysterious character.
Indeed, in this novel our trio needs to go to the Alliance, an old vampire’s organization knowing that Vays worked there for many years. But from the start everything is turned upside down and it’s difficult to understand the reasons. The atmosphere is so strange as the acts of the characters and we wonder what is going on. We can feel the evolution of the heroes and their relationship all along the story. I think the one who really impressed me was David. He is always so upset by all he’s been through and it’s complicated for Jaz to see him like that. She tries to not show it and to help him as she can but she is also so worried… Well, I have to say she already has a lot in mind when they finally meet Disa, this woman who has a big power on our vampire. From the start we know there is a problem about this Deysar, but we can’t see what it is.
It was a really great volume and it was a pleasure to follow this story as the plot leads us on many tracks. The meeting with Trayton was also very enjoyable; I didn’t expect to like a character so soon. I hope we’ll see him in the other books.
The end wasn’t a big surprise, I suspected somewhat what would happen but it’s not a problem, mainly when we learn more about the running of the Alliance instead.  I’m now very curious to read the next book to know more about the relationship between Jaz and Vayl (yeah I know it’s always like that), to see if they could go through their problems and to determine if David could overcome after the magician.

9 thoughts on “Bitten to Death by Jennifer Rardin”