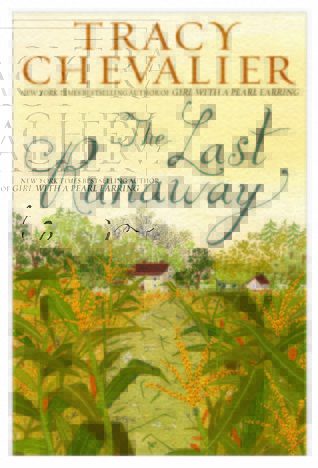 Synopsis: In New York Times bestselling author Tracy Chevalier’s newest historical saga, she introduces Honor Bright, a modest English Quaker who moves to Ohio in 1850, only to find herself alienated and alone in a strange land. Sick from the moment she leaves England, and fleeing personal disappointment, she is forced by family tragedy to rely on strangers in a harsh, unfamiliar landscape.

Nineteenth-century America is practical, precarious, and unsentimental, and scarred by the continuing injustice of slavery. In her new home Honor discovers that principles count for little, even within a religious community meant to be committed to human equality.

However, drawn into the clandestine activities of the Underground Railroad, a network helping runaway slaves escape to freedom, Honor befriends two surprising women who embody the remarkable power of defiance. Eventually she must decide if she too can act on what she believes in, whatever the personal costs.

A powerful journey brimming with color and drama, The Last Runaway is Tracy Chevalier’s vivid engagement with an iconic part of American history.

Winter is approaching, temperatures are dropping. I regret not taking a warm jacket, and I’m jealous of Le Chat du Cheshire who is well wrapped in her big parka. I have a runny nose, and I begin to sniff. I’m going to be sick, I’m sure of it, but it does not matter. We have a mission.

Melliane is at my side, cold too. She is not used to such low temperatures, and her gloves are too thin for the wind that has just risen.

The girls nod slowly. I see the workings of Melliane’s brain that kicks into gear.

-Operation Rescue “The Last Runaway”, huh … That’s all! We do not scatter!

Johanne mutters something at my side, hands in her pockets. The moon is reflected in the windows of the headquarters of the Anonymous Books-addicts.

-No Johanne, it is a trial run, so do not be too ambitious.
– I know, I know, she replies wearily.

I understand that the task tonight is difficult, challenging. Because even if we carry out our mission, our joy will be tinged with a bitter aftertaste. We need to save The Last Runaway because this novel is worth it, but there are many that are worthwhile. And the black-prohibited-list-of-books lengthens at each meeting. The next one is tomorrow. If I managed to avoid talking about Written in Red at the last, I know that the Redhead Cerberus was not fooled. I felt her piercing eyes through me and I even thought that her mane was ablaze when her reddish locks began to twirl. I did as if nothing had happened, with an innocently look saying: “What do you want?” But with Melliane sighing, I felt that I was not at my best and I certainly did not win an Oscar for my interpretation.

I leave my backpack plaid patchwork that I crafted for my mother and throw it on my shoulders. I’m ready.

Uh, don’t you have something more discreet? Johanne wonders.

– Because Turquoise, it’s not ideal to go unnoticed.
– Pink either, whispers Le chat du Cheshire by giving her a nudge.

It is true that for the level discretion, we can forget it. I’m draped with a turquoise and chocolate patch, Johanne has a large pink scarf that goes down to her ears, Le Chat has opted for an orange hat a little too big for her, and Melliane proudly displays a yellow vest “for warming the heart, “she has said. At this point, we all chuckled at the same time like in novels. I did not think that we could giggle, but that’s it, I’ve experienced it. I promise that I’ll now stop to roll my eyes whenever a heroin chuckles.

But I thought that the idea of the patch plaid was good, it is a part of the fabric of this book, these pieces of fabric that are assembled to tell our story.

I understand her mood swing, we all understand that. It’s a bit her fault that the last fugitive is on the list, she delivered it. As we have delivered many. We did not know …

I briefly think of this novel, one of my most vivid readings in my recent weeks. We have everything, a remarkable pen, a well-led narrative tension, specific references to the historical context in transition. Honor is one of those heroines that we can’t forget. Courageous woman, like many others in her time, she is fighting against her destiny and against the precepts that the society wants to impose. Her meetings are colorful. Diversity is good thing. Her fingers are nimble, a patchwork is a living testimony. I liked to follow her even if I cursed some of her decisions, knowing, after all, that it could not be otherwise, it’s a Quaker. Tracy Chevalier dragged me in this country in construction, born of a difference that is not always accepted. And then, as Chat says it, we have Donovan. This detestable character I also became attached to. This is also my only regret, not knowing more about him. So yes, I understand the Chat’s remorse for delivering this little gem. But we were weak.

-Uh, do not you think that you’re a bit much inflamed there? Melliane whispers me.

I’ve spoken out loud, red rises to my cheeks and I suddenly get hot.

-Good, are we going?
-At Least, no bull, Johanne says, trying to reassure herself as best as she can.

A furious barking is heard.

I’ll really have to start sports, this story is becoming dangerous …

13 thoughts on “Celine’s adventures: The Last Runaway by Tracy Chevalier”