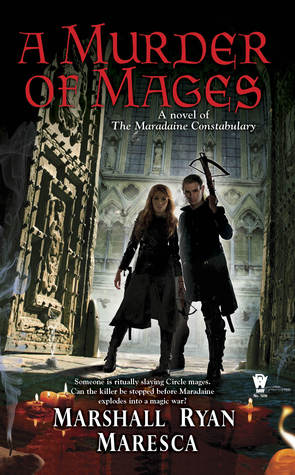 Review: While reading the summary, I wondered if the book would go more towards the fantasy side or the urban fantasy one. Finally I think this is a good mix of both, even if the purpose converges towards the second.

Satrine is a young woman who must face the consequences of the loss of her husband. He is not really dead, but in a vegetative state that requires her to take care of his body, as well as her two children. That’s why she needs to find a job as soon as possible to meet the needs of her family. And so, Satrine, by presenting a false letter of recommendation, is engaged as an Constabulary agent. Being back in the city of her childhood, she will face the demons of her past and the politics existing among the different population groups living there. Teaming up with the only person that nobody wants in the Agency, Minox, they will investigate a strange murder. Indeed, they fall on a case starring a mage and whose realization seems more than intriguing.

Launched in a race against time to prevent the fast increase of the number of bodies, Minox and Satrine will have to put all their talents ahead before understanding what is really happening. Besides, we follow the two alternately and although I prefer Satrine’s POV and how she plunges back into her past, it was also interesting to see how Minox was working. His non-circled mage condition is quite unprecedented and it is true that his life is not necessarily simple, especially compared to his work. His interactions with other mages are also still very tense about that fact and it was fascinating to see all that.

In all cases I loved to understand the investigation and see what exactly hapenned. Besides, I was quite surprised by the revelations at the end of the story. The only point to note and what bothered me a bit the length of certain events. That’s I was sometimes a little behind the story as the events could be quite slow.

In any case, it was an interesting book to discover and I am curious to see what we will have for the future.

27 thoughts on “A Murder of Mages by Marshall Ryan Maresca”