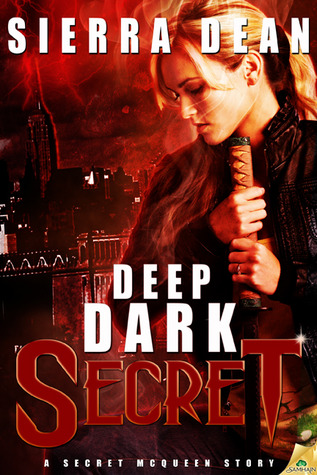 Synopsis: Secret McQueen has hunted vampires, werewolves, and every conceivable supernatural menace-to-society. Seen it all? Not even close. When the queen of the were-ocelots comes to her for help finding a missing girl, the half-vampire/half-werewolf soon realizes how much she has to learn about the things that go bump in the night.

The case of the missing cat is one thing. Pile it up with her new duties as a Tribunal Leader, her tenuous position as mate to the king of the Eastern werewolves, and a slew of new (and unwelcome) supernatural abilities, and Secret is once again in familiar territory. Way over her head. But for this multitasking half-breed, it’s business as unusual.

What knocks her for a loop, though, isn’t her lover’s intoxicating kiss. It’s the missing memories rushing at her from out of nowhere, signaling a rapidly approaching fork in her destiny. Her choice will affect not only her life, but her love.

Warning: This book contains a werewolf king with wandering hands, a creepy English professor with nefarious plans, and one hell of an unexpected gala evening at Columbia

Review: It’s always a pleasure to find Secret again and her hectic life. I must say that her destiny is looming more and more and we feel a constant evolution in her character. Indeed, a lot of things happened in the previous novel and I was very curious to attend the events there.

Our young heroine is now a full member of the court, a place that is not really familiar, but she tries to adapt and to meet the requirements of people around her. If only it were only that but she must also manage her position in the pack and the meaning of being the companion of two alphas. This is already something very complicated in itself, but she must also investigate the disappearance of a young girl who strangely coincides with the reappearance of the man who has totally broke her heart years before. This allows us also to be able to learn a little more about her past as it ultimately remains quite mysterious.

There are as always a lot of things in this novel and Secret evolves a lot. We therefore see that she is ultimately even more different than what we thought. I really wonder where the story will end up and I’m looking forward to reading the other novels in order learn more. I am also looking forward to seeing how her relationship with Desmond and Lucas will change, ad they’re both completely different and tensions finally starting to appear. I admit that I love the two men and I would struggle to pick just one… Besides they are not alone and even if Holden isn’t very present here, it’s like it was the case. I was quite surprised to see that Sig wasn’t really present either, especially after what had happened earlier but I hope that we’ll have the opportunity to learn more in relation to his motives as it’s really difficult to understand that.

The plot of this novel was fabulous and I was completely surprised several times by the turn of the history. Sierra Dean masters her world and her characters and I’m very curious to continue to learn more and more. This is a very good urban fantasy series, full of originality and I warmly recommend you to try it if you haven’t yet.