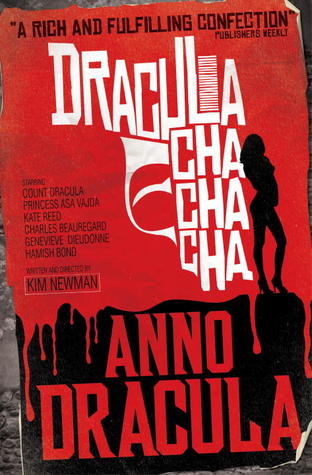 Synopsis: Rome. 1959. Count Dracula is about to marry the Moldavian Princess Asa Vajda – his sixth wife. Journalist Kate Reed flies into the city to visit the ailing Charles Beauregard and his vampire companion Geneviève. Finding herself caught up in the mystery of the Crimson Executioner who is bloodily dispatching vampire elders in the city, Kate discovers that she is not the only one on his trail…

Review: I did not really know about the series although it’s true that I had the opportunity to see the covers as well as the name of the author on some blogs. I wondered for a moment if it would not be a problem to start with a third book but the summary let me think it would not be the case. Of course, I know that the synopsis is not everything but I can tell you that starting with the third volume is really not a problem. But it’s true that now I’m pretty curious to see what the first two parts present.

In this story, we discover three young female vampires, Genevieve, Kate and Penelope, who gathered for a funeral. Indeed, their former love, Charles is about to die and each appears to try to change his mind and to say goodbye. But the arrival of Kate in Rome coincides with the assassination of elder vampires and our heroine is determined to understand what exactly is happening. But these events also coincide with the future marriage of Princess Asa and Count Dracula that everyone seems to expect. Thus we follow all these people and their discoveries of the secrets of Rome.

I will not say much more for fear of revealing too much but it’s true that we are easily carried away by the writings of the author and I was really curious to see how the story would develop. Many events take place and we end up at the same time with some surprises that we don’t expect. I loved to discover Kate and the other characters and it’s true that I am curious to find them again. What surprised me the most was to see two different stories in this novel. In fact, we follow mainly the story of the murders, Dracula and three women, then after the conclusion we have a second story presenting Kate, ten years later trying to solve a murder. I was not expecting it at all especially when we see that finally the two are not related but it was interesting to discover more about this universe.

In any case it was a great find and it is true that I am eager to find out more about Kim Newman’s books now!