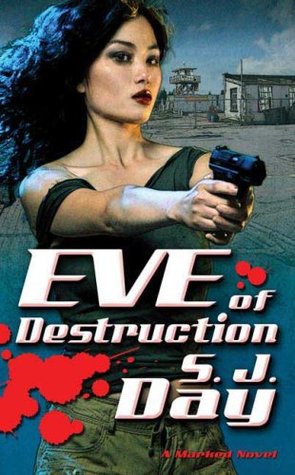 Synopsis: Class is in, but Evangeline Hollis is struggling to get through the requisite training to be a full-fledged Mark. When her class goes on a field trip to an abandoned military base, passing the course isn’t just a matter of pride…it’s a matter of life and death. There’s a demon hidden among them, killing off Eve’s classmates one by one.

As the body count mounts, a ragtag team of cable TV ghost hunters unwittingly stumbles into the carnage. Now keeping the Mark system secret competes with the need to keep the “paranormal researchers” alive. With Cain on assignment and Abel on an investigation, Eve must fly solo on her hunt to stop a killer before he strikes again.

Review: I liked the first volume of the series and I confess that I was curious to read what would happen after such an end. We find all our characters in a different story. Indeed, while Cain is sent to investigate the facts that took place in the first volume, Eve must take courses in order to become a true Mark. Yet nothing will happen as planned …

As everyone went their own ways, Cain realizes that some paranormal creatures act in a very strange way. Trying to understand what is going on, he will have to leave Eve behind to discover the truth. Meanwhile, our heroine is taking classes with other people like her on an abandoned basis. The problems begin to become more delicate when one of the members is killed and it seems that this is only the beginning.

It was a pretty nice volume and it was quite different to see the characters on their own although Abel joined Eve very quickly (which will add to the complications already present, it must be said). I was curious, I have to say, to understand exactly what was happening and who the culprit behind all these deaths was.

As I said, a lot of things happen in this second volume and I admit to being surprised by a few, especially about Cain. I really wonder how the whole thing will be settled because the situation has been completely changed. I now need to read the third and last volume!

19 thoughts on “Eve of Destruction by S.J. Day”