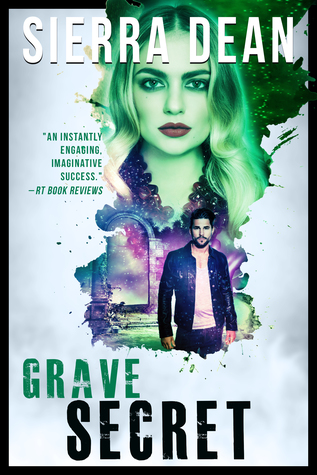 Synopsis: Sometimes a secret goes to the grave. Sometimes Secret puts you there.

It’s been a hell of a year for Secret McQueen, and the last thing in the world she wants is to get caught up in werewolf drama. But when her former fiancé Lucas Rain shows up asking for her help, she knows there’s no easy way out.

After making it known she wants nothing to do with him, Secret agrees to help find Lucas’s wayward sister Kellen. After all, how much trouble could one socialite get into in the city that never sleeps?

Unless that socialite has been spirited away by fairies.

Trying to track down a missing girl in an alternate reality is just the start of Secret’s problems, though. Someone appears to be killing teenagers, and the MO looks eerily similar to something for which the half-fairy oracle, Calliope, might be responsible. Throw in a rogue wolf pack claiming allegiance to Secret’s mother, Mercy, and she’ll have miles to go before she rests.

Warning: This book contains a promise fulfilled, sex that’s out of this world, and more heartache than one hybrid assassin can handle.

Review: I really like this series but I read it as you savor a good wine, slowly, quietly never to come to the end. But then, with the closing of the publishing house, I rushed to buy all the paper copy and now I see them every day! How to resist? So I threw myself with pleasure in this fifth volume of the adventures of Secret McQueen.

Our heroine had a hard time managing since Lucas abandoned her at the foot of the altar and since Desmond left her life. She finds herself once again facing many problems. Luckily for her, Holden is always there to help her. Yet, this time, the problems will lead her into situations that are far more dangerous than she thought. In fact, Lucas comes to her home after 6 months of absence to order and threaten her to find her sister Kellen who disappeared. On top of that, a fae seems to kill in town and Secret thinks that her friend Calliope could be the one.

I really had a good time with this novel. As always an enormous amount of things happens and I confess that I appreciated very much to learn more about the fae world that we had only a little talked about. As always Secret will also have to manage her feelings, especially towards Holden and Desmond, which is really not easy. I was curious to see how the encounters between Secret and Lucas were going to happen, especially after all that happened. It’s easy to understand her feelings and how she’s hurt, but I confess that I was surprised that he did not try to do more. I confess he disappointed me on this one …

In any case, I once again had a great time with this new novel. Sierra Dean is extraordinary and her stories always carry me easily. I am looking forward to reading the next book !!!