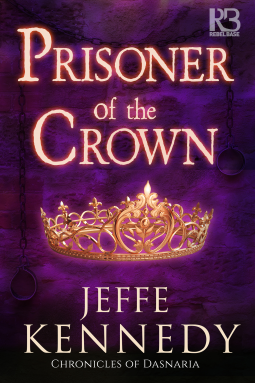 The Chronicles of Dasnaria, Book 1

Synopsis: She was raised to be beautiful, nothing more. And then the rules changed . . .

In icy Dasnaria, rival realm to the Twelve Kingdoms, a woman’s role is to give pleasure, produce heirs, and question nothing. But a plot to overthrow the emperor depends on the fate of his eldest daughter. And the treachery at its heart will change more than one carefully limited life . . .

THE GILDED CAGE
Princess Jenna has been raised in supreme luxury—and ignorance. Within the sweet-scented, golden confines of the palace seraglio, she’s never seen the sun, or a man, or even learned her numbers. But she’s been schooled enough in the paths to a woman’s power. When her betrothal is announced, she’s ready to begin the machinations that her mother promises will take Jenna from ornament to queen.

But the man named as Jenna’s husband is no innocent to be cozened or prince to charm. He’s a monster in human form, and the horrors of life under his thumb are clear within moments of her wedding vows. If Jenna is to live, she must somehow break free—and for one born to a soft prison, the way to cold, hard freedom will be a dangerous path indeed…

Review: Jeffe Kennedy is now offering us a new fantasy series and as I usually enjoy her stories, I could not wait to get into this one.

The author presents us with a world where women are only an incarnated object. Besides, they have pushed the vice to the point where, from birth, they are locked up in a place where they will not leave until the day when they are to be married. It is an extraordinary place where everything is done so that they are as content as possible, thus avoiding that they develop a critical spirit. Everything is done to make them beautiful and docile. They have never met a man other than their brothers or half-brothers when they were very young. Even their father is excluded. But here, Jenna is a little different from the others. She always wanted to go out and discover the world, see what all can not. Unfortunately for her, when she discovers her future husband, he is far from what she had hoped for. It could even be her worst nightmare.

I really liked this first novel. It’s very different from what we usually find. It’s a pretty dark story, quite difficult even if not everything is shown and that the author has kept the most violent scenes for her, leaving us to put words on what she does not say. We discover a heroine who changes, who evolves, who wants a freedom that she can not have. We hope, we cross our fingers very hard so that Jenna finds a solution, so that she gets out of this infernal cycle, that she realizes that there is a whole world to discover.

Yes, it was an interesting first volume and I can not wait to see what will happen to the young woman afterwards.

15 thoughts on “Prisoner of the Crown by Jeffe Kennedy”