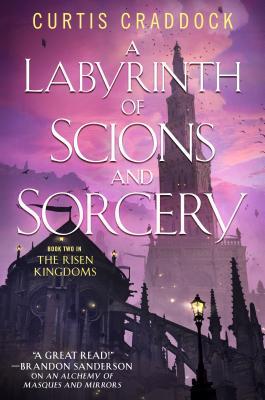 Synopsis: A Labyrinth of Scions and Sorcery is the masterful sequel to Curtis Craddock’s critically-acclaimed high fantasy An Alchemy of Masques and Mirrors, which continues the engrossing tale of courtly intrigue and breathtaking magic, and starring our fiercely intelligent heroine Isabelle des Zephyrs with her loyal musketeer Jean-Claude.

Isabelle des Zephyrs has always been underestimated throughout her life, but after discovering the well of hidden magic within her, unveiling a centuries-long conspiracy, and stopping a war between rival nations, she has gained a newfound respect amongst the cutthroat court.

All that is quickly taken away when Isabelle is unfairly convicted of breaking the treaty she helped write and has her political rank and status taken away. Now bereft, she nevertheless finds herself drawn into mystery when her faithful musketeer Jean-Claude uncovers a series of gruesome murders by someone calling themselves the Harvest King.

As panic swells, the capital descends into chaos, when the emperor is usurped from the throne by a rival noble. Betrayed by their allies and hunted by assassins, Isabelle and Jean-Claude alone must thwart the coup, but not before it changes l’Empire forever.

Review: I read the first volume when it came out and I must admit that I had forgotten a lot of the story. It’s terrible to have a goldfish memory! Yes, I’m telling you! However, I was delighted to embark on this sequel and to find Isabelle and Jean-Claude in new adventures!

Isabelle thought she had succeeded in establishing the treaty that will save everyone. Yet when she interfered to save a young woman falsely accused of murder and about to be killed, she did not know that the consequences would be like that. Yes, because she loses everything for a selfless and above all normal act. Having to manage her new status, but always surrounded by her friends, she will also have to try to dismantle a coup d’état, although it is not easy, either on her side or that of Jean-Claude, who will also have to face a part of his past.

I really had a great time with the characters and I loved the interactions between Isabelle and the guard present throughout the story who is trying to keep her safe as best he can. Even with her status, Isabelle will really have to face many problems and her choices will be decisive! We will learn a little more about her father, which is as always fascinating, and I wonder what the author is preparing for the future now.

This second volume was a beautiful discovery. There are many ideas and especially characters who present us with new facets of them every time!