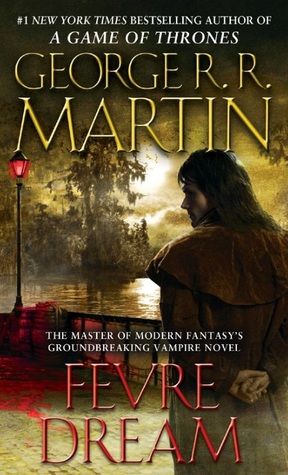 Synopsis: A THRILLING REINVENTION OF THE VAMPIRE NOVEL BY THE MASTER OF MODERN FANTASY, GEORGE R. R. MARTIN

Abner Marsh, a struggling riverboat captain, suspects that something’s amiss when he is approached by a wealthy aristocrat with a lucrative offer. The hauntingly pale, steely-eyed Joshua York doesn’t care that the icy winter of 1857 has wiped out all but one of Marsh’s dilapidated fleet; nor does he care that he won’t earn back his investment in a decade. York’s reasons for traversing the powerful Mississippi are to be none of Marsh’s concern—no matter how bizarre, arbitrary, or capricious York’s actions may prove. Not until the maiden voyage of Fevre Dream does Marsh realize that he has joined a mission both more sinister, and perhaps more noble, than his most fantastic nightmare—and humankind’s most impossible dream.

Review: This is an author that everyone knows, but I must admit that I had never tried a single one of his novels. If I’ve never really been attracted to Games of Throne, I thought it was a good opportunity to discover one of his stories. And how can I resist a steampunk story with vampires? I must admit, I was curious to discover the mix.

Marsh didn’t expect to make the deal of his life: to have the best steamboat possible while being a partner with a man he doesn’t know. He knows this is a once-in-a-lifetime opportunity and Marsh is looking forward to sailing his new ship. Yet Joshua hides secrets, terrible secrets and our captain is determined to find out what’s going on. But trouble is coming and they are much more dangerous than they thought. To win, our two heroes will have to join forces, and even then, nothing is certain.

I had a good time with the novel and I admit that I was curious to see where the author was going to take us. The style is quite dense, but it’s not necessarily embarrassing and we discover complex and interesting characters.

I am delighted to have discovered a novel by the author and I will be happy to read another one.