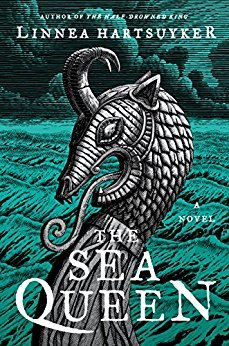 Synopsis: Six years after The Half-Drowned King, Ragnvald Eysteinsson is now king of Sogn, but fighting battles for King Harald keeps him away from home, as he confronts treachery and navigates a political landscape that grows more dangerous the higher he rises.

Ragnvald’s sister Svanhild has found the freedom and adventure she craves at the side of the rebel explorer Solvi Hunthiofsson, though not without a cost. She longs for a home where her quiet son can grow strong, and a place where she can put down roots, even as Solvi’s ambition draws him back to Norway’s battles again and keeps her divided from her brother.

As a growing rebellion unites King Harald’s enemies, Ragnvald suspects that some Norse nobles are not loyal to Harald’s dream of a unified Norway. He sets a plan in motion to defeat all of his enemies, and bring his sister back to his side, while Svanhild finds herself with no easy decisions, and no choices that will leave her truly free. Their actions will hold irrevocable repercussions for the fates of those they love and for Norway itself.

The Sea Queen returns to the fjords and halls of Viking-Age Scandinavia, a world of violence and prophecy, where honor is challenged by shifting alliances, and vengeance is always a threat to peace.

Review: I had had a good time with the first volume of the series and if I had forgotten a lot about the story by the time of the release of volume 2, I returned to the universe with pleasure. It took me a few chapters to get the facts straight, but I was delighted to see the characters again and to see the rest of their adventures.

Solvi, Ragnvald, Svanhild are back, and we are going back into their history, and of course into this war between them. Even if they thought they might have a little respite, things change quickly and show them that rest is not for them. But on top of that, Solvi and Svanhild will have to deal with their own problems to try to move their family forward. However, things are far from simple. What about Ragnvald? Well, he’s going to realize that things aren’t as white or black as he thought they were and he’ll have to make tough choices when everyone tries to manipulate him.

It was a really exciting novel once again and I really enjoyed seeing what was going on for each of the characters. Life is not simple and the dangers are at every corner, but they will all have to move forward and make decisions. I was sad for Svanhild who is suffering more than anyone else in this second volume, but I am really curious to see what will happen to her now.

Yes, a very interesting and complex story that keeps us on our toes until the end!

8 thoughts on “The Sea Queen by Linnea Hartsuyker”