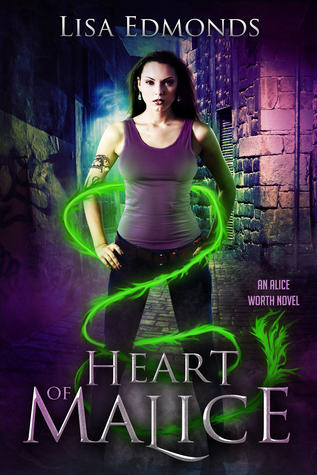 Synopsis: The first time Moses Murphy’s granddaughter killed on his orders, she was six years old.

For twenty years, she was a prisoner of an organized crime syndicate, forced to use her magic to make Moses the most powerful and feared man on the East Coast. To escape his cruelty, she faked her own death and started a new life as Alice Worth. As a private investigator specializing in cases involving the supernatural, Alice walks a precarious line between atoning for the sins of her grandfather’s cabal and keeping her true identity hidden.

Hired to investigate the disappearance of a mysterious object of power, Alice enlists the help of Malcolm, a ghost running from a past as nightmarish as her own. It soon becomes clear the missing object was taken by someone with a dangerous secret and an unknown agenda. When her client is kidnapped, Alice must find her and the object of power before a vengeful killer destroys the city and slaughters thousands—starting with Alice.

Review: I was very intrigued by the synopsis of this one and I got into the first novel.

We discover Alice Worth, a private detective who flees her past and who hides her power. Finding herself linked to a ghost by chance, the young woman will finally have a sidekick for her investigations, even if he is not declared. Yes, because it seems that one of her clients needs her to understand why her books are disappearing. However, it seems that this story is much more complicated than expected! And even more dangerous! It is in this context that she will meet a charming werewolf Sean who, after a one night stand, would like a little more. But Alice knows perfectly well that nothing is possible between them.

I had a good time with this story. If I have to admit that at first I had a hard time getting into the story and really hanging on it but, little by little, I must also admit that I was curious to know more. It was a bit like for the romance with Sean as well, and I had a hard time seeing the chemistry at first, but finally I connected it and I must say that I’m curious to see what’s going to happen now.

It was a pretty cool novel with lots of ideas and I am very curious to discover the rest of their adventures and to learn more about Alice’s past that she hides, or about Sean or Charles life!

13 thoughts on “Heart of Malice by Lisa Edmonds”