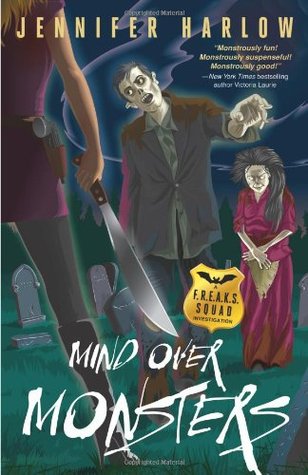 Synopsis: Beatrice Alexander is no ordinary schoolteacher–she can move objects with her mind, an embarrassing skill she hasn’t yet mastered or embraced. After nearly killing her brother by accident, she joins the F.R.E.A.K.S. Squad, the Federal Response to Extra-Sensory and Kindred Supernaturals. This top-secret branch of the FBI combats ghosts, ghouls, and other monsters threatening humanity.

Review: I had this novel for a very long time, but it took me a little while to get into the story. I had bought it after reading some nice reviews and I finally started it.

Beatrice always had a gift that put her on the margins of society. It always made her a little strange, but since she rescued one of her students who was about to be crushed, something has come out of her. Her power has become more powerful. So when a man comes forward to offer her a new life, one where she can train her power and meet other people like her, she accepts it. This special FBI subsidiary would allow her to no longer be considered as a monster.

I really enjoyed discovering Beatrice. She doesn’t know how to deal with everything that happens to her and when she discovers all these people who know each other, so different from each other and that in addition she finds herself in the middle of an investigation and danger, things completely escape her. The investigation was really very nice even if it wasn’t very complicated to find the culprit. I really liked the small team with Will the sexy werewolf, but a little alpha or Oliver, the vampire a little unbearable and yet also touching at times.

Yes, it was a good discovery and I am curious to read more!

5 thoughts on “Mind Over Monsters by Jennifer Harlow”