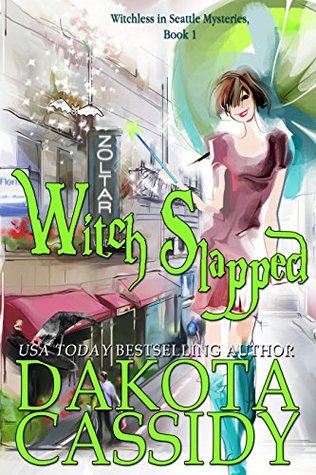 Synopsis: “Oh, good. Not a problem. I’ll invoke the Gods of Pilates. I’m sure they’d be happy to help. Hang on just one sec while I dial them up. Oh, wait. I can’t. Know why I can’t? Because my hands are tied behind my back with zip ties, Win!”

A rib-tickling cozy mystery complete with an ex-witch, a dead British spy, a cotton ball bat and a cast of suspects that will keep you guessing right up to the end! Witch Slapped from USA Today bestselling author Dakota Cassidy is book one in her new cozy mystery series Witchless In Seattle. Join the hunt for a murderer with Stevie, Winterbottom, and Belfry in a race against time as the local police prepare an eight by ten cell for our intrepid ex-witch.

What’s a girl to do when she’s a broke, shunned ex-witch with a very tiny, very hungry bat familiar named Belfry to feed?

Hello. My name is Stevie Cartwright, and I’ve been witchless for thirty days.

If only there was a support group for down-on-their-luck ex-witches who’ve had their powers slapped right out of them (literally). Just as I was licking my wounds after returning to my hometown of Ebenezer Falls, WA, and navigating my suddenly non-magical existence with the help of my familiar, the only friend I have left in the world–things got sticky.

Enter an ex-spy and newly departed spirit named Winterbottom, who’s infiltrated my life with his sexy British accent and a couple of requests…

Thanks to Belfry’s successful attempt to use me as a human antenna to the afterlife, I can somehow hear Win. I should be ecstatic; helping departed souls used to be my witch specialty. It’s like I got the teensiest piece of my old life back. Except Win’s dropped me right at a dead woman’s feet.

Madam Zoltar, the town’s beloved fake medium, has been murdered, and Win wants me to catch the killer.

My old life won’t be worth much if it gets me whacked before my new life has barely begun–and that seems to be exactly what the killer has planned!

Content Notes: This cozy mysteries women sleuths series has a complete cast of oddball characters from witches to ghosts and bats to psychics. Witchless In Seattle Mysteries is a spin-off of Dakota Cassidy’s popular A Paris, Texas Romance Series.

Review: I had this novel for free on amazon. But when I started the book, I didn’t pay attention to the fact that it was a spin-off story, even though I don’t think it’s actually a problem because I didn’t feel like something was missing.

Right now, I’m having a hard time finding novels that interest me and I’m having a little bit of a reading breakdown. So I got into some paranormal cozy and hoped I could get all this through. Unfortunately, it didn’t really work and I have to say that I had a lot of trouble connecting to the story. I don’t think it’s due to the story itself, because the reviews are quite good, but unfortunately, it was complicated for me. Apart from that, I can’t deny the fact that it was an interesting investigation involving an ancient witch who can communicate with the dead and whose familiar is a bat (which, it must be said, is still very nice!).

It probably wasn’t the best time for me to read this story and if it was fun, I couldn’t really get into it.