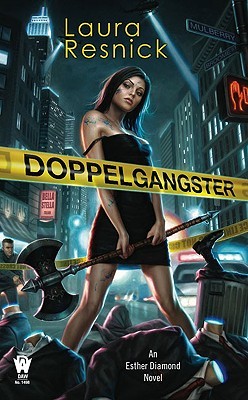 Synopsis: A struggling actress, a 350-year-old mage whose day job is protecting New York City from Evil, a skeptical cop—and double the number of wiseguys that there should be….

While working as a singing waitress in Little Italy, struggling actress Esther Diamond witnesses a mob hit. And right before getting whacked out, the victim tells her that he just saw his own doppio—a perfect double and a notorious portent of death.

Before long, more döppelgangers start haunting New York’s mobsters, who are subsequently getting bumped off in mysterious ways. Meanwhile, Esther’s new love-interest, Detective Connor Lopez, gets transferred to the NYPD’s organized crime unit and is assigned to investigate these hits.

Determined to prevent the murder of more of her restaurant customers, which slayings will soon lead to a mob war, Esther tries to uncover the evil genius behind the deadly doppelgangsters. Along with a 350 -year-old sorcerer and an aging hit man, Esther delves deep into the world of wiseguys in pursuit of a ruthlessly mystical murderer.

Review: I liked the first volume, but I didn’t necessarily think it was fantastic. But it had potential, and I had bought the second one. It took me a few years to get started, and I must admit that I didn’t really remember the story. And then, did you see the covers of this series? I love them all!!!

So I threw myself into this second novel with curiosity and I must admit that I had a really good time. I was all the more happy to see that this volume was set in the universe of the mafia ! Oh yes, because our heroine, Esther, is going to find herself in some really funny situations! Because after losing her job, our actress finally has to lower her expectations and go back to working as a singer/waitress in a mafia bar. But that’s also where she’s present during the murder of a capo and from there on… that’s the beginning of the end! Yeah, well, mostly the beginning of trouble!

As I was saying, I had a great time with this novel. Our heroine is going to have to deal with a new case, but luckily for her, she won’t be alone and Max will always be there to help her and besides now he has a huge dog/family member. Better yet? A former capo will be there all along too to try to figure out what’s going on and I must admit I loved Lucky! And did I mention Lopez? Because of course he’s there too, even if things aren’t going to turn out as they both planned.

A good time as I was saying and I saw that the next book will be about zombies and voodoo! I’m even more curious to get into it!

11 thoughts on “Doppelgangster by Laura Resnick”