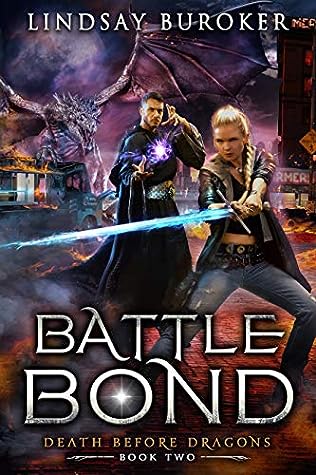 Synopsis: If you think having one dragon around messes up your life, imagine what it’s like when a second one shows up.

He still calls me a mongrel and thinks I’m a criminal, but he healed my wounds after we fought those dark elves together. That’s progress, right? Maybe one day, he’ll deign to use my name.

Not that this is my primary concern. I’m busy with a new assignment. Nin, the awesome lady who makes my magical weapons, has a werewolf problem. Specifically, sleazy loser werewolf competitors who want to drive her out of business. Or worse.

Normally, a couple of werewolves wouldn’t be a big deal, but these ones have powerful allies. And then there’s that new dragon.

It turns out he’s one of Zav’s enemies, and he wants to use me against him.

I don’t know why he’s picking on me—it’s not like I mean something to Zav—but somehow I’ve gotten stuck in the middle of dragon politics. If you think that sounds like a nightmare, you’re right.

If I can’t figure out a way to help my friend with the werewolves while keeping these dragons from tearing me apart, we’re both going to end up flatter than the deck chairs when Zav lands on the roof of my apartment building.

Review: I had read the first volume some time ago in English and if I didn’t remember the story very well, I knew I had a great time! So, I rushed to read volume 2 to see if it would be the same.

Val has a lot to do: a new dragon is in town and is determined to use her as bait to lure Zav to him; her friend Nin is in trouble and can’t defend herself against shifters determined to shut her business down. In short, Val will not be bored!

I had a good time with the novel, even if I felt some length at times. It was a pleasure to meet all the characters again for a new adventure (especially Zav, it must be said!). I was curious to see how our heroes were going to manage all the problems that keep piling up and I must admit that after this ending, I really wonder what will happen to them.

This was a really fun second volume and I will be excited to read the sequel!