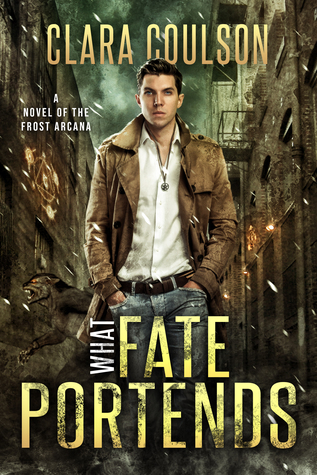 Synopsis: “Faeries liked to tease the weak, but they loved to annihilate the strong.”

Seven years ago, the exposure of the paranormal led to the tumultuous downfall of human society. Now, the legions of the fae rule the broken world, and humanity has nothing left but a handful of protected cities and a heaping helping of regret.

Enter Vincent Whelan. Half fae and former cop, he’s become the best-known stretch scavenger in Kinsale, North Carolina, braving the “stretches” outside his city to recover precious items lost in the collapse. He makes good money. Lives the good life. Has a good future in store. As long as he can ignore his traumatic memories of the past.

But when a new job with an odd twist blows onto his doorstep, Vince finds himself unwittingly drawn into a vast conspiracy lurking underneath Kinsale’s thin veneer of civilization. Old friends suddenly return to haunt him. New enemies appear at every turn. And Vince fears he isn’t prepared to confront either one.

But if he doesn’t put his detective hat back on and solve this case on a tight deadline, then what’s left of the city he calls home might just crumble to dust.

Review: I had had a good time with the author’s first volume of City of Crows, so I was curious to dive into another series with What Fate Portends. I love faes, so how can I resist an urban fantasy novel featuring a male hero and all this by being half fae and half human? I love that, I can tell you that!

We are discovering a world that has suffered great damage since humans and supernatural beings clashed. A kind of apocalypse that changed society forever. However, some cities have been preserved and if others are abandoned, people continue to live like that. Vincent, is a former police officer who is half human and half fae. But here it is, since this change, he doesn’t do the same job and now goes to the old cities to collect the objects that people want, even if it is dangerous. However, when a person shows up and asks him to find a harp that has been brought back and for which he can’t find the buyer, Vincent thinks it could be an easy job. Except it seems that this object has caught the attention of very dangerous people, and no one appreciates that he is snooping to find the object.

I really enjoyed this novel and I must say that I can’t wait to read more. Vincent has been through enough and now only wants to live quietly while hiding what kind of fae he is. And it’s not easy, it has to be said! He’s not the type to run headlong into things, he thinks, and especially if he can, he runs away. Unfortunately, this time it will be complicated, especially when he takes his former teammate and human friend with him. Together, they will try to understand exactly what is going on.

Yes, I really had a great time with this novel, even more than with his other series I think and I really liked the mix of ideas. A very good urban fantasy novel!

12 thoughts on “What Fate Portends by Clara Coulson”