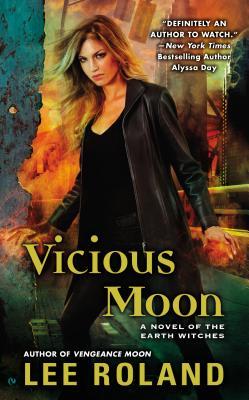 Synopsis: “A powerful witch might live a long time, but a single well-placed bullet could change that. While my preferred weapon was magic, I was not averse to shooting anyone or anything offering my sister or me harm.”

Ex-soldier and earth witch Nyx Ianira is working as a PI in San Francisco when she sees the last thing she ever wants to see: the Sisters of Justice—the mysterious earth witch police force. A Triad of Sisters usually means an execution mission, but the Sisters’ only goal is to capture and escort Nyx across the country.

Nyx is badly needed back in Twitch Crossing, Georgia, the place she ran away from ten years ago to escape the stiff rules and duties of being a true witch. She wanted a life of her own. Now she’s being dragged back to her swampy hometown because another life is in danger: Her little sister is missing, and Nyx is the only one who can track her down in Duivel, Missouri.

But the key to finding her may lie with dark and tempting Etienne—a sinister criminal with a fearsome reputation, a ruthless attitude, and a total immunity to magic….

Review: I was really curious to start this series, especially given the beautiful reviews that I had read. I thought it would me may be difficult to start with the third book because I think it’s always the fact with traditional urban fantasy novels as we need to read a book after another. But not at all! Each novel follows a different person, so it is not a problem to read this novel apart from the others, though I am now very curious to discover the stories of the first volumes.

Nyx is a young woman who ran away for her whole life. Earth witch, she left her city before having to train her power which would have required her to follow the education like every witches. And for this, she decided to be part of the army and never came back on this decision. Yet when one day, the Sisters of Justice brought her back to her town so she could discover what had happened to her little sister who is missing, Nyx will have to come to terms with her past. For this, she has to go to Duivel, the last known location of Marisol. But this place is weirder than ever. A demon lives there hidden, several groups survive, the most bizarre creatures roam there and a man is immune against any form of magic. In this context, our young heroine will have to investigate and try to understand the subtleties to find her sister.

I loved Nyx. She is an independent young woman who is not afraid of anything, and yet she is more than worried about her sister. She will end up in a world that will completely change her life, forcing her to reconcile with her witch side. She is also accompanied by her familiar we can only love. he has also some strange habits and yet he is always so funny. And whatever we might think, he will always be there to help our witch. I must say she will need his help with that many enemies and with her powers amplifying without any control. In addition, we meet Etienne, a man who, like her, is an ex- soldier, but also a wanted criminal in the whole world. I admit that I was very curious about him, and it was not until the end of the story that we really understand who he is. His ability to be immune to magic and to return all spells makes him quite unique. I had a lot of questions about him, as much as our heroine and I was also surprised to learn the truth. His relationship with Nyx is also curious. He protects and follows her wherever she goes, feels attracted to her and at the same time, he dedicates a visceral hatred to all witches, which makes things quite difficult I must say. Yet together they form a beautiful duo.

The Lee Roland has created is the most intriguing world and I confess that I did not expect to have something as complex. I had a lot of fun to discover it and it is true that I still have many questions. It was a novel that completely won me and I loved the story from beginning to end. Everything is fascinating and I do not expect to have many revelations like that. The end introduces us a mysterious character and I confess that I can not wait to learn more about him. This is a very good story that I recommend! I hope to have the opportunity to read the next one very quickly.