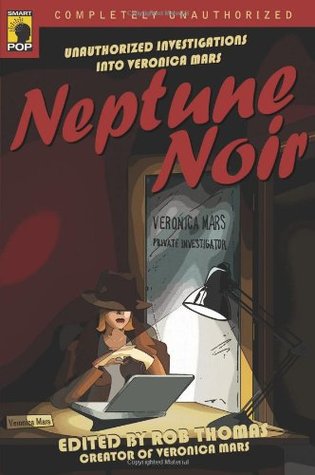 Synopsis: More than just a high school drama, “Veronica Mars” is a smart and savvy teen detective show that offers complex mysteries and rapier wit, engaging social commentary, and noir sensibilities—with the occasional murder thrown in for good measure. This collection, edited by the creator and executive producer of the show, offers supreme insight into the class struggles and love stories of the series. Essays by top writers intelligently address a multitude of questions such as: Is Veronica a modern-day vigilante? Why is a show that features rape, potential incest and a teen girl outsmarting local authorities so popular with America’s conservative population? and Why is Veronica and Logan’s relationship the most important story-driving factor in the show?

Review: I confess that when I saw the book, I immediately thought that I could find stories of Veronica Mars but in written form. Yes because younger I took a great pleasure in following this series and I was very sad when it was stopped, leaving us full of questions. With the release of the movie, the appeal of the show came back and it is true that I was curious about this novel too. Yet it was not at all what I expected. I expected as I said before some nice short stories about Veronica (yes I do not know why ), but we finally find several authors who dissect the series or at least the first two seasons according to their feelings.

Firstly, the novel introduces the story of Rob Thomas, father of Veronica Mars and eventually his life as well. From his successes but also failures, to the idea of ​​this series and how he came to give life to it, but also the choice of castings including the Kristen Bell one. I admit that it was quite interesting to see as this isn’t a world I know about and I was impressed enough to see how it would all unfold. Once past this introduction we go a little deeper into the heart of the matter, alternating authors, journalists and other people who tell us what they see in this show. And it’s true that it’s quite impressive to see the details that some managed to emerge from the series. It thus covers many topics that I would not have thought possible. Yes, because we can find some on cars, on the conservative side of the story or how lies are easily established. But that’s not all because ultimately, some themes recur repeatedly, whether the rape of Veronica and how she faced it, or rather her symbiotic relationship with her father, no mother, but of course as well on her relationship with Logan and Duncan. As you can see, many points are discussed here although some are repeated a bit, which is a shame as it was quite interesting. By cons I have to say something, even if I enjoyed the show, I think the novel is perhaps a little too much. I had the impression that this was really the series of the century. It was fine, but you must still understand that it is only that. And although it is very interesting to see what people were able to find behind all these episodes, I think sometimes we just need to watch it and appreciate what we have in front of our eyes.

To conclude, I think that I can say it was a pretty interesting book, very different from what I usually read and even if it is perhaps not something I’ll particularly read again, it’s always interesting to be able to learn more that way.